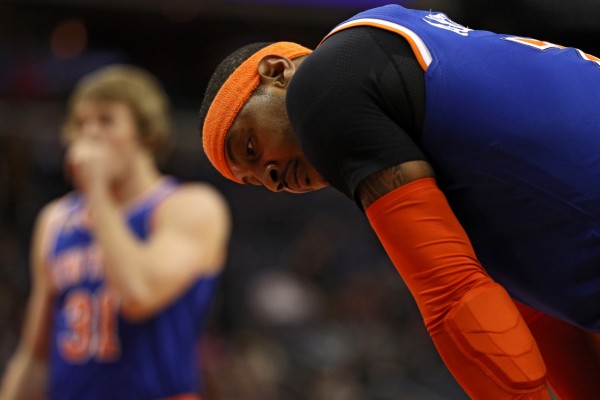 One of the players that figures to be available in a trade this summer is Carmelo Anthony of the New York Knicks, but if the opinions of Miami Heat fans factor into any potential deal, the Heat would be advised to look elsewhere.

The Palm Beach Post asked fans to offer their opinions about a possible acquisition of Anthony, with many offering strong opinions via e-mail and Twitter that showed a vast majority of them against the idea.

For example, one fan believes that team president Pat Riley can do much better than Anthony:

“No, No, No,” he wrote. “CA (Anthony) is the absolute antithesis of what the Heat have been under Spoelstra and what he has accomplished in creating the “TEAM” concept. Even when we had the luxury of the ‘Big Three,’ coach S somehow managed to get them to play together as well as possible. Having been a longtime avid Celtic fan, I really appreciate the job he has done since the BT have been ‘disassembled.’ Watching a much less talented group develop into an almost playoff contender was most satisfying. Regardless of whether the Heat can keep either (James) Johnson or (Dion) Waiters (or both), Riley should be able to attract a much, much better alternative to Carmelo to make sure that the Heat build on the progress they made in the second half of the season and become a legitimate playoff contender next year. I saw enough of Carmelo playing with (?) the Knicks in the last few seasons to conclude that he would be the absolutely last addition the Heat should pursue @ this time. No, No!!!”

Another thinks that Anthony’s huge salary is a hindrance to building the team and a slap in the face to former Heat legend Dwyane Wade:

“Should the Heat pay Melo even more money than they refused to pay DWade? I can’t believe that this is even being discussed.”

A brighter future for the Heat would be short-circuited by trading for Anthony in the opinion of this fan:

“A trade for Melo would be a disaster. The Heat have a very good nucleus and with their first round draft choice they could be in a great position to be very strong in the future.”

The most brutal assessment came via this fan:

“We don’t need an aging ball hog, that doesn’t play defense,” he said. “Cancer to a team. Keep building with new, young players.”

Finally, one indication of just how strong the disinterest is can be seen in the opinion of someone who actually states that he’s a fan of Anthony:

“Love Melo but I don’t think that’s the right move.”

While it’s not a certainty that Anthony will be dealt, especially because he has a no-trade clause in his contract, Knicks team president Phil Jackson reportedly would like to send him elsewhere. Jackson’s comments earlier this month that effectively stated that are the clearest sign that Anthony’s days in New York could be numbered. If he is sent elsewhere, the Heat fan base appears to be hoping that it won’t be to the 305.
[xyz-ihs snippet=”Responsive-ImagenText”]