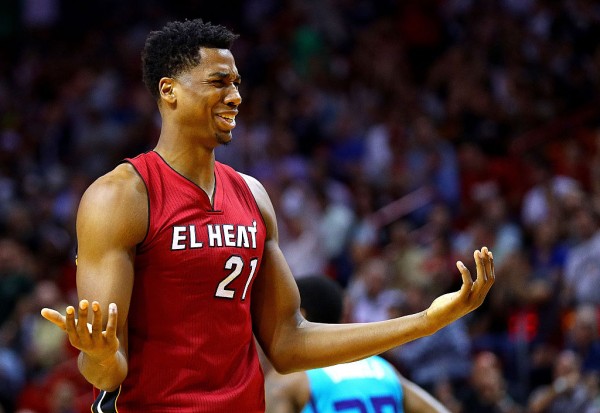 Miami Heat broadcaster and television analyst Ron Rothstein called out Hassan Whiteside‘s lack of effort in an interview over the weekend. Despite praising the star center, Rothstein did not hold back about 7-footer’s inconsistent effort:

Rothstein also mentioned that in the first quarter sometimes, opponents drive to the basket “unmolested [and Whiteside] is just standing there.”

During his early tenure with the Heat, Whiteside often had to be prodded by teammates to perform at his highest level. That problem seemed to have subsided once he got his huge $98 million dollar contract, but every couple games, Whiteside reverts back to old habits.

A prime example of one of those lackluster performances was in the Heat’s 106-94 loss to the Oklahoma City Thunder on Tuesday night, when the center contributed just 12 points and eight rebounds and battled foul trouble for most of the evening.

According to Tom D’Angelo of the Palm Beach Post, Heat head coach Erik Spoelstra was not pleased with the effort either but refrained from criticizing the Heat’s franchise player.

Spo danced around 2 Whiteside question. Said "I thought in the fourth quarter he was making better impact plays" But clearly not happy

However, despite these periodic lapses in effort, Whiteside has had an All-Star worthy season so far as he’s averaging 17.8 points on 54.6 percent shooting, a league-leading 14.7 rebounds, and 2.2 blocks per game.

Whiteside will get a chance to rebound from his dismal effort as the Heat take on the Charlotte Hornets at Spectrum Center on Thursday night.
[xyz-ihs snippet=”Responsive-ImagenText”]