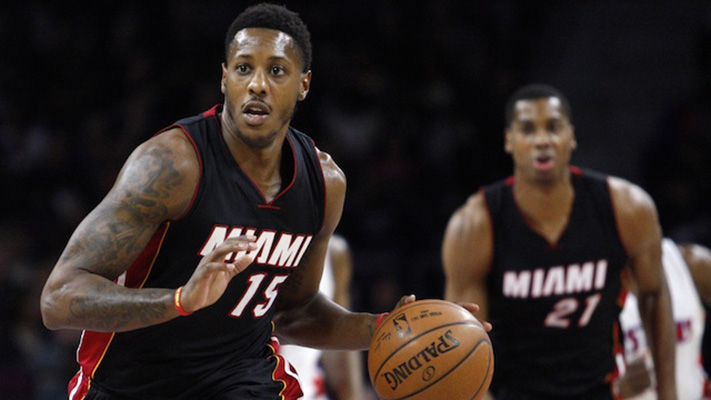 Just as fans and media alike have no idea as to what exactly is weighing in on Dwayne Wade‘s mind at the present moment, it would appear that his own teammates are no different.

Both Mario Chalmers and Hassan Whiteside were at American Airlines Arena on Tuesday as the Miami Heat announced a $350,000 donation from the team’s charitable fund to Big Brothers Big Sisters to create a fitness center for at-risk children in Miami. Neither seemed to know what Wade’s intentions were in regards to his contract situation.

Said Chalmers on the topic of Wade:

“I’ve been talking to D-Wade. Me and him are very close. But we really haven’t been talking about basketball. It’s just about life stuff. And right now, we’re just focusing on life and the kids.

The point guard went on to state that there’s “no concern” on his part and that it’s “out of his control”:

Whiteside took a passive stance on the issue, saying it “wasn’t his place” to address the topic:

“I’m just kind of leaving that to D-Wade and the organization. I’m just leaving that up to them,” he said. “I haven’t spoken to Dwyane.”

Wade is currently working as an analyst for ABC’s coverage of the NBA Finals. Chalmers commented on his teammate’s work on television:

“I was impressed with him. I thought he would be a little more nervous than he was, a little bit more stuttering. But D-Wade is a big fan of the game. He knows his stuff about the game. He does a lot of research.

Outside of Wade’s agent, Henry Thomas, there hasn’t been a single individual within the organization to publicly comment on the current stance of contract negotiations between No.3  and the Heat.

The 33-year-old shooting guard has until June 29 to opt in or opt out of his current contract. If he exercises his player option, he will earn roughly $16.1 million for the 2015-16 season.

With how “quiet” both sides have been in regards to this situation, there’s little doubt that Wade is very serious about receiving a new contract from the franchise.
[xyz-ihs snippet=”Responsive-Ad”]