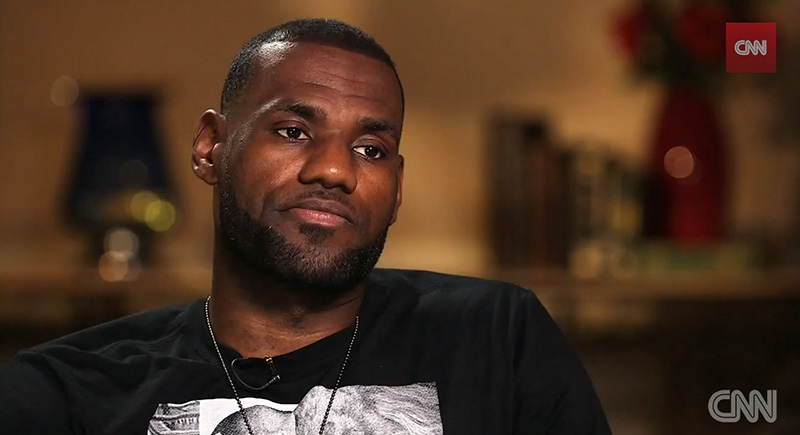 The biggest storyline of the offseason was LeBron James leaving the Miami Heat for the Cleveland Cavaliers.

Though James announced his decision to return to Cleveland more than two months ago, it is a storyline that will be a major focus throughout the course of the 2014-15 NBA season. So take it as no shock that James’ recent statements in an interview with CNN’s Rachel Nichols made headlines just a few days before NBA training camps open.

James stated the following when asked if he would’ve stayed in Miami had the Heat defeated the San Antonio Spurs in the 2014 NBA Finals:

“It’s a greater chance, for sure,” James said. “It would be hard to leave back-to-back-to-back championships and try to go for four. But obviously you really can’t live and think of what may have happened. I’ve always been a person to kind of live in the moment.”

From that one statement alone, you get this impression: the Heat’s loss to the Spurs made LeBron come to the conclusion that he wouldn’t win any more championships in Miami.

The four-time MVP can sugarcoat it all he wants, but the Finals series loss to San Antonio led James to believe this would be the ceiling for himself and the team as long as he was in Miami. It’s hard to criticize the current Cavalier for his line of thinking—his teammates were dreadful in the Finals. If there ever was a series that demonstrated how reliant the Heat had become on LeBron’s contributions as an individual talent, that was the perfect series to look at.

“The King” said it himself, if the Heat win versus the Spurs, he returns to South Beach for a fifth season. Hell, he likely spends several more seasons in Miami after that. Of course, those weren’t the actual results—Miami lost in the 2014 Finals and it led to massive criticism surrounding the organization entering the offseason. As a result of last year’s humiliating finish, there were questions of whether the Heat could win another championship even if the ‘Big Three’ returned together in 2014.

The Spurs’ demolition of the Heat led to President Pat Riley issuing a challenge—directed at LeBron in particular—to stay in Miami in an effort to rebound from their Finals loss. Four days after Miami’s defeat in June, Riley addressed the media. Many of his statements were in regards to motivating the ‘Big Three’ to re-sign in Miami to avenge their Finals loss.

Here are some quotes from Riley in that very press conference from June:

“This stuff is hard. And you’ve got to stay together if you got the guts. And you don’t find the first door and run out of it.

“There’s just looking around the room now and finding out who’s going to stand up. This is the time that you go home and take care of yourself and look at yourself and what are you going to do to come back and make the team better? Because we have a tremendous opportunity here for long-term success. But don’t think we’re not going to get beat again. So, just get a grip, everybody. That’s my message. That’s my message to the players.”

Riley finished off his rant with the following:

“You deal with it by doing what you have to do to make yourself better by taking accountability for yourself and your own actions and not laying it off on something else or somebody else.”

Riley’s angry rant was echoed with the intention that it would motivate LeBron to re-sign in Miami by fueling his desire for redemption, and more championships. It did the exact opposite—it turned off LeBron more than anything else. By challenging James’ manhood after he had led the franchise to two championships and four Finals appearances, it was more insulting than anything else from “The King’s” point of view.

Only a small part of LeBron’s interview with Nichols on CNN’s “Unguarded” focused on why he left Miami for Cleveland. But the meaning hidden underneath his statement regarding “what could have been” had the Heat won the Finals was his lack of faith regarding Miami’s future as possible champions.

Only time will tell whether “The King” was accurate in his beliefs.