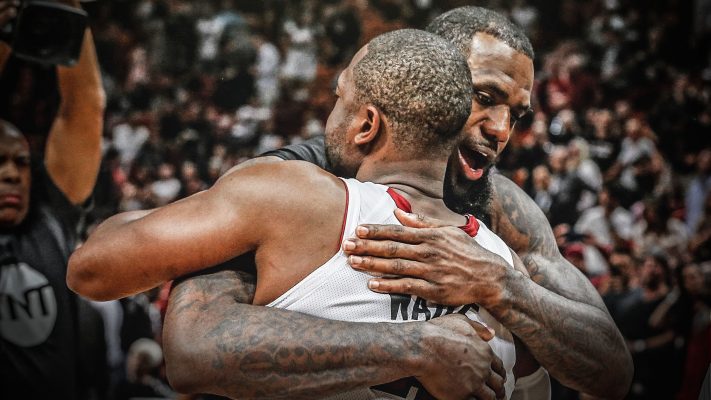 The four-time MVP opened up about his final match with Wade, per Anthony Chiang of the Miami Herald:

“It’s bitter and it’s sweet. It’s sweet and it’s sour,” James said. “The sweet part is that I’ve always loved being on the floor with my brother. We struck up a relationship together at the combine in 2003, and it started from there. And the sour part about it is that this is our last time sharing the same court. Sometimes it’s just chemistry. Sometimes you can’t even explain it.”

James, 33, goes way back with the Heat guard. Wade and James, who both came out of the same 2003 draft class, are very close pals and have had extremely successful careers. However, while Wade is coming to the end of his storied career, it looks like James is just getting started. The three-time champion is putting up 28.3 points, 7.7 rebounds and 6.9 assists in his first season with the Lakers.

As James talked about the sweet moments the pair shared, the four seasons between 2010-14 highlight them all. With both stars teaming up on the Heat, the duo went to the NBA Finals all four years and won back-to-back championships within that span.

Since James left, the Heat have been unable to capture anything close to that caliber of winning. It’s fair to say fans have missed a player of James’ talent level. The forward visited Miami a few weeks ago and posted a masterful performance with 51 points, eight rebounds, three assists and two steals on 61 percent shooting from the field.

Although Wade wasn’t able to play in that matchup, everyone will get a chance to see two of the game’s greatest players battle each other one last time in Los Angeles.
[xyz-ihs snippet=”HN-300×250-TextnImage”]