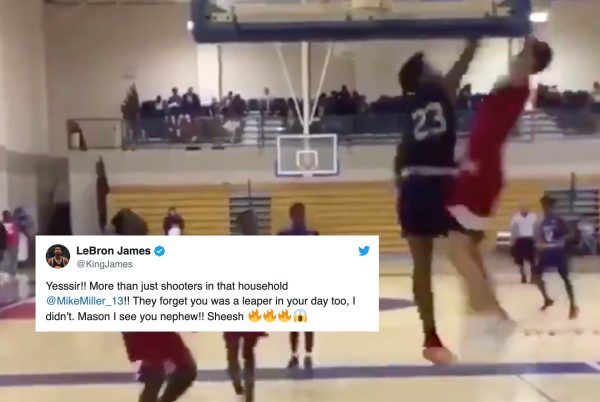 Mason Miller, the 6-foot-9 son of former Miami Heat guard Mike Miller, is already making a name for himself as a sophomore in high school.

In a recent game, he managed to deliver an impressive dunk that caught the attention of his father’s former teammate, LeBron James.

It wasn’t long before James was weighing in on the impressive play.

Yesssir!! More than just shooters in that household @MikeMiller_13!! They forget you was a leaper in your day too, I didn’t. Mason I see you nephew!! Sheesh ???? https://t.co/rvbPKSTVwn

The sophomore currently plays basketball for Houston High School in Germantown, Tenn. His father serves as an assistant coach at the University of Memphis.

Like his father, who stands 6-foot-8 and connected on 1,590 3-pointers during his 17-year NBA career, Mason Miller has displayed a knack for connecting from beyond the arc. However, this dunk indicates that he’s quite the threat inside as well.

During Mike Miller’s three seasons with the Heat from 2010 to 2013, the team reached the NBA Finals each year and captured the league title during the latter two campaigns in 2012 and 2013. In those seasons, he started 21 of his 139 regular season contests and averaged 5.4 points and 3.4 rebounds per game.

Mason Miller has already received scholarship offers from both Texas Christian University and Creighton University. With two more years before he graduates, the number of schools on that list figures to rise considerably before he makes his final choice.
[xyz-ihs snippet=”HN-300×250-TextnImage”]