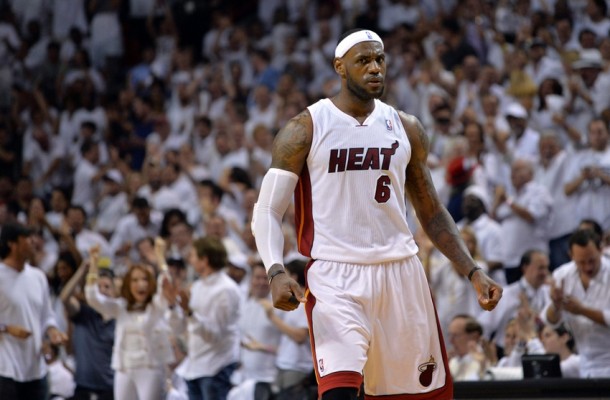 Like all of the NBA greats, LeBron James‘ career is filled with myth-like stories. One from his years with the Miami Heat may take the cake.

In an article detailing James’ incredible ability to fight the wear and tear of a 15-year career, ESPN’s Brian Windhorst retold the story of the time James inexplicably gained seven pounds in an Eastern Conference finals game.

“Seeing him turn his ankle nearly 90 degrees only to tighten his shoelaces and finish with a triple-double,” Windhorst wrote. “Watching him show up four hours before a playoff game to get in a sweat-soaked workout, then play more than 40 minutes and score 40 points. And the topper: the time James gained seven pounds during an Eastern Conference finals game.

Some Miami Heat teammates saw the scale and attest to it in amazement. James himself just shrugs and calls it ‘weird as hell.’ The truly wild part is that it was from 271 pounds to 278 pounds, though James is much lighter these days.”

It’s one of those myths that would likely never be believed if it wasn’t for the multiple witnesses on the scene. While James is no longer a member of the Heat, stories like these will live on forever.
[xyz-ihs snippet=”HN-300×250-TextnImage”]