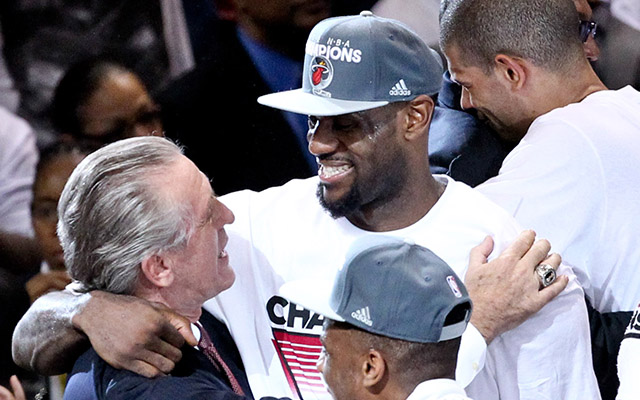 LeBron James is no longer a member of the Miami Heat, but that doesn’t mean he isn’t still carrying the lessons he learned from playing under Heat team president Pat Riley.

After James was named AP’s male athlete of 2018, the four-time MVP credited Riley with one very important lesson about business and life.

One more from LeBron, on how he juggles basketball with his growing off-court business and education interests: "Keep the main thing as the main thing. That's what I learned from the great Pat Riley."

It seems simple, but when it comes to stars like James, who are not only tasked with winning championships, but also tasked with running multiple businesses, raising a family, and so much more, life can certainly become quite complicated.

Riley is respected throughout the NBA as a great winner and a great man, and there is no doubt that he had quite the impact on James.

Riley’s storied career started as a player in the NBA. He later went on to coach some of the most successful teams in league history before moving to the front office and orchestrating the identity that the Heat organization still holds. While it is unclear what the future holds for James’ career, there is a chance that he will one day follow a very similar trajectory.
[xyz-ihs snippet=”HN-300×250-TextnImage”]

Featuredlebron jamesmiami heatNews Tickerpat riley
← Previous Story Dwyane Wade Explains Why He Should Be to Blame for Loss Against Toronto Raptors
Next Story → Steve Kerr Says 2018 Warriors, Not 2010 Heat, Most Scrutinized Team in NBA History