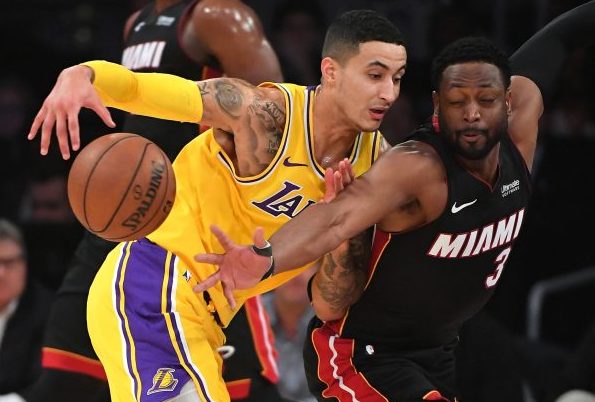 The emotional game led to multiple Lakers, including Kyle Kuzma, sharing their respects for the three-time champion.

All time great!! Dope to be apart of basketball history tonight. Crazy watching as a kid then to be on the same court!!! Appreciate everything you’ve done for the game @dwyanewade #OneLastDance #Flash

While Wade didn’t play nearly as great as he would have during his prime, the shooting guard and Heat gave the Lakers a memorable show. Although the Heat lost in a nail-biter, 108-105, Wade showed flashes of brilliance before he finished the game with 15 points, 10 assists and five rebounds.

Kuzma, on the other hand, gave his best vintage Wade performance. The 6-foot-9 sophomore recorded a game-high 33 points and seven rebounds on a whopping 63 percent shooting from the field. Despite Kuzma outplaying Wade, the forward was the one in awe to share the floor with the 2006 Finals MVP.

It’s completely understandable as one the league’s greatest shooting guards puts the finishing touches on a amazing career.

In addition to being the face of the Heat franchise, Wade has three championships, a gold medal and is a 12-time All-Star. The 36-year-old has career averages of 22.3 points, 5.5 assists and 4.7 rebounds. It’s fair to say Kuzma won’t be the last youngster showering Wade with praise.
[xyz-ihs snippet=”HN-300×250-TextnImage”]