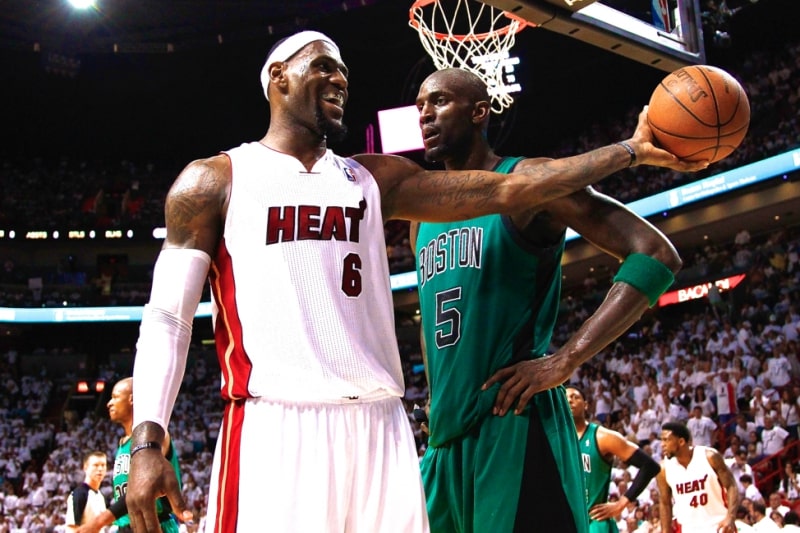 During the Miami Heat’s Big 3 era, the Heat faced many tough tests on their way to two NBA championships.

One of their toughest tests came against the Boston Celtics during the 2012 Eastern Conference Finals, when the Heat went down 3-2 in the series.

Miami wound up winning two straight games, highlighted by LeBron James’ incredible Game 6 performance in Boston, to advance to the NBA Finals. They went on to win the title against the Oklahoma City Thunder.

Kevin Garnett, who was a part of that Celtics team in 2012, went on “The Bill Simmons Podcast” and spoke about a variety of topics, including those battles against the Heat.

The 43-year-old went on to explain that although there is respect between the two groups, there isn’t a lot of love.

In total, the Heat and Celtics have faced off against each other two other times in the playoffs. Their first ever playoff meeting was in 2010, when Boston beat Miami 4-1 in the first round. The second matchup, which came during the first year of the Big 3 era, was in 2011.

The Heat managed to come out on top and win that series, 4-1.

Something to note is that Garnett didn’t mention Ray Allen, who was also part of that 2012 Celtics roster. After that series loss, Allen signed with the Heat the following offseason, something that still doesn’t sit well with Garnett and the rest of the Celtics.

It’s interesting to see that even after all these years, Garnett still talks about the strong feelings he has towards those Heat teams. It speaks to the Garnett’s competitive spirit and the epic battles the two clubs participated in.