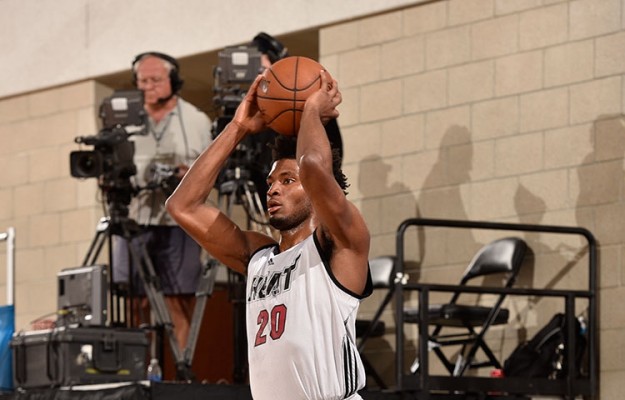 Justise Winslow may be a mature 19-year-old, but that doesn’t mean he’s a fully polished product just yet.

Winslow told Barry Jackson of The Miami Herald exactly what adjustments he needs to make as he prepares for his first season in the NBA:

“More games, more physical, more back-to-back. You have to figure out ways to fight through it.”

The Miami Heat small forward received his first taste of professional basketball during the Heat’s summer league tour in Orlando and Las Vegas. While he was somewhat solid in Orlando averaging 11.5 points, 2.3 rebounds and two assists in 24.8 minutes per game, he was slowed down in Vegas due to a sprained ankle injury. Winslow averaged just four points in 11.5 minutes per game while out west.

Justise Winslow says he needs to adapt to physicality, schedule of NBA http://t.co/K7iBQUAVtX

While the physicality of the NBA may be a bit of an adjustment, Heat superstar Dwyane Wade has reached out to his fellow teammate in regards to keeping the rookie healthy for the duration of the season:

“Everything between me and Dwyane has been helping me transition from college to the pros. We barely talk anything Heat [related]. He’s just helping me get adjusted from everything from the lifestyle to the duration of the season, how to take care of my body, diet and nutrition,” said Winslow.

It won’t be an easy adjustment for the University of Duke product, but he will most assuredly be in good hands when it pertains to strength and conditioning during his rookie campaign in Miami.
[xyz-ihs snippet=”Responsive-Ad”]