Don't Miss
Home / Media / Justise Winslow: ‘I love it here, I have no intention of going anywhere’

Justise Winslow: ‘I love it here, I have no intention of going anywhere’ 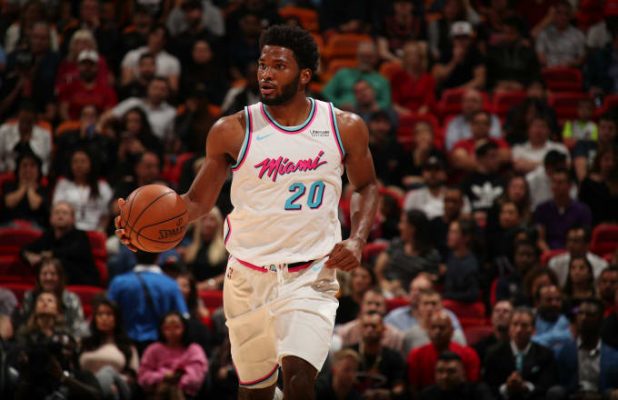 Despite being one of the Miami Heat‘s hardest working players, small forward Justise Winslow finds himself in a tough spot when it comes to contract circumstances.

While Winslow hasn’t been the star Miami anticipated he would turn into when they drafted him with the 10th pick in the 2015 NBA Draft, he hasn’t been a slouch either. Still, the uncertainty of the youngster’s role, potential and fit has the two parties at an unclear standstill.

The Heat have the option of giving a contract extension to Winslow, who is entering his fourth season in the league. There’s no promise the team will find a suitable offer; however, if the Heat want to hand the forward a contract, it has to be presented by Oct. 15 or else Winslow will enter next year’s market as a restricted free agent.

When the topic camp up at the Heat’s first day of training camp, the 22-year-old responded positively:

“It’s fine,” he said before the first bounce of balls at camp. “I mean, look, I’m in a great position. Whether we get the contract done or not, I would love to get it done. But I love it here. I have no intent of going anywhere.”

While the deadline for a rookie-scale extension is less than a month away, Winslow seemed unconcerned:

“So whether it’s this fall or next summer, I’m sure we’re going to figure something out. So I’m not too concerned about it”

After averaging a career-high 10.9 points during the 2016-17 NBA season, the Duke University product put up just 7.8 points last season. Although his scoring average dipped, Winslow had a strong postseason showing. In five games against the Philadelphia 76ers, the 6-foot-7 forward averaged 9.8 points on 36 percent three-point shooting and 6.6 rebounds.

During the battle with the 76ers, Winslow showed toughness, improved shooting and versatility. The solid defender would be an attractive asset for other teams looking for a productive point-forward. Still, Winslow reiterated that he’s happy with where he’s at for the time being:

“Just having the personal conversation with the front office and everyone from top to bottom in there and the coaches and teammates, I’m very comfortable where I am and everything is going to take care of itself”

Regardless of how the situations turns out, it’s safe to say the mature pro wants to stay in Miami and will continue to give it everything he has this upcoming season.
[xyz-ihs snippet=”HN-300×250-TextnImage”]