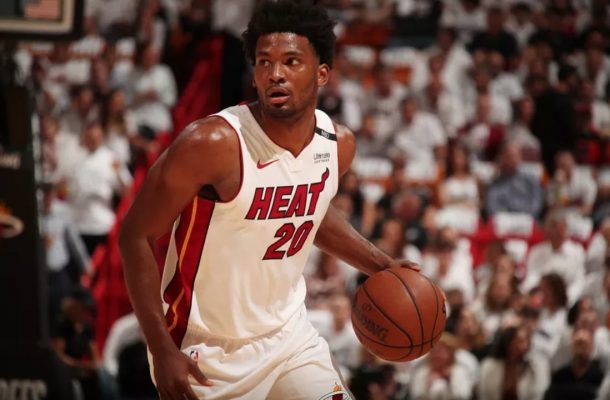 With the Miami Heat and Justise Winslow facing a deadline of next Monday to sign a contract extension, negotiations are continuing between the two sides.

While the team hasn’t offered an update on talks, Winslow appears confident that an agreement will be hammered out by the time that date arrives.

“There’s been talks. We’re getting close,” Winslow said on Monday. “I think it should get done.”

As a first-round pick in the 2015 draft, Winslow has to be signed to an extension by that date or he’ll become a restricted free agent next July.

His name has reportedly been mentioned in the Heat’s trade talks involving Jimmy Butler, with the team having the dilemma of a Winslow deal now adding to their already overburdened salary cap. If he were to enter free agency, the team would retain his Bird Rights, allowing them to match any offer he receives.

During his time with the Heat, Winslow has performed well with the ball in his hands and provided effective defense. However, he was sidelined for a good portion of the 2016-17 campaign because of injury, with some concern about his durability potentially affecting the team’s negotiating stance.

One comparison with regard to the type of money involved could be from last year, when the Heat signed Josh Richardson to a four-year extension for $42 million.

Ira Winderman of the Sun Sentinel explained one change in the rules involving a potential trade of Winslow after he’s signed:

“Under NBA rules, first-round picks who receive extensions prior to their fourth NBA seasons become subject to what is termed a ‘poison pill’ provision.

“For example, should Winslow, who will earn $3.4 million this season agree, hypothetically, to a four-year, $44 million extension, an acquiring team would have to take him in at $9.4 million, while the Heat would send him out at the $3.4 million.”

With the preseason winding down and the Heat getting prepared for their Oct. 17 regular-season opener in Orlando, Winslow isn’t expressing too much concern about the ongoing discussions.

“It is what it is. I’m not worried too much about it,” Winslow said. “Hopefully, we can come to something.”

The Heat will host the New Orleans Pelicans on Wednesday night.
[xyz-ihs snippet=”HN-300×250-TextnImage”]