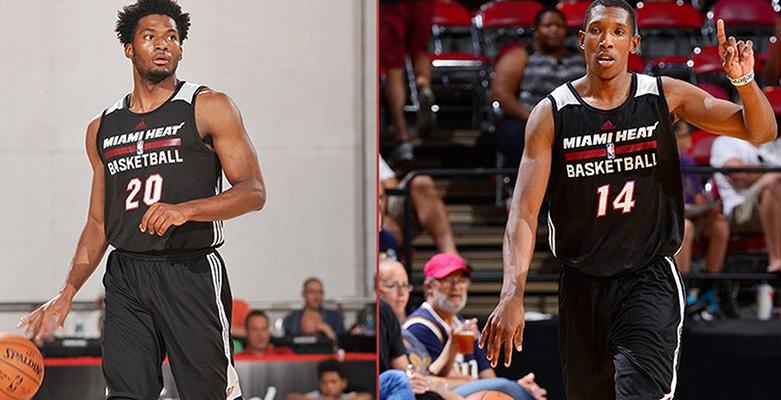 Defense just may end up being one of the Miami Heat’s strengths entering the 2015-16 season.

That is in large part due to their rookies, Justise Winslow and Josh Richardson. Both were highly regarded defensive players in college, and have already shown that mindset within their first three days of training camp in the pros.

“It doesn’t happen too often, but I put the two young guys on the same team today and they’re very good defensively. They got after it. They made the veterans work for it. They have a great versatility and energy between the two of ’em. I was very encouraged about what they brought, very competitive in defensive drills.”

Richardson talked about his experience specializing in defense entering college:

“I came in as a defender, so I guarded some of the best college players. I think I’m prepared to go out there and try to contain some of the best players in the world, just coming in, being defensive-minded. Justise is the same way.”

However, he stressed that there is a big difference between playing defense in college compared to the pros:

“As soon as you touch a guy with your hands it’s a foul. In college, if anybody remembers, I was pretty handsy. It’s an adjustment process, but it’s been going well.”

Winslow warned against getting too excited about performances in practice—he’s well aware that the real test will come in actual games versus opposing competition:

“The real test will be in the games. In practice, you try to simulate a game. But you never know really until you really get out there.”

If the Heat hope to contend with the very best the Eastern Conference has to offer, they’ll need both Winslow and Richardson to emerge as dependable defenders. With the exception of Luol Deng, Miami does not have any perimeter players who are capable of shutting down opposing offensive competition.

Seeing as how the top teams in the East feature players such as LeBron James and Derrick Rose, Winslow and Richardson will need to continue to excel defensively if the Heat want to advance far this season.
[xyz-ihs snippet=”Responsive-Ad”]