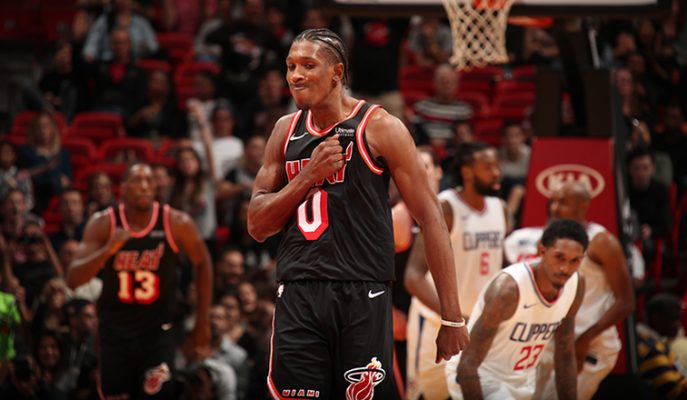 Josh Richardson has been a member of the Miami Heat for the past three seasons, having developed into an NBA talent after being drafted in the second round of the 2015 NBA Draft. As he continues working toward his fourth year in Miami, the hope is that he acquires a more aggressive mindset that will lead to more offensive production, according to Manny Navarro and Barry Jackson of the Miami Herald:

“How does the Heat improve offensively with a similar roster after finishing tied for the 23rd in the league in scoring last season?

“Mostly from improvement from within. And one player we’re told the Heat would like to be more aggressive is Josh Richardson.”

The 24-year-old Richardson is coming off his best season with the Heat after averaging 12.9 points, 3.5 rebounds and 2.9 assists per game. Navarro and Jackson noted that Richardson isn’t content with that improvement:

“Richardson, prepared to take a bigger role offensively if needed, has been working diligently this offseason on creating his own shot and off-the-dribble moves. He has worked out in both Miami and Santa Barbara, Cal.”

Numbers like that offer hope that Richardson may be able to boost his scoring average to as much as 18 points per contest. One of the areas of improvement that he’s been working on during the offseason to make that happen is in the area of ball-handling, with one particular goal in mind.

“I want to be able to have a ball on a string next year so I can play in [isolation] situations more,” Richardson said.

The improvement during the 2017-18 campaign by Richardson was aided by staying injury-free, which allowed him to play in all but one regular season contest. While he did injure his left shoulder during the five-game playoff series against the Philadelphia 76ers, there appears to be no lingering issue about the situation.

Richardson’s come a long way since being the 40th overall pick in that 2015 draft, with enough teams taking notice that he’s been the subject of some trade talk. Right now, the Heat have no interest in any such conversations, even as they look for ways to improve their roster. That suggests that they could be looking at Richardson as a long-term prize that they want to hold onto in the years ahead.
[xyz-ihs snippet=”HN-300×250-TextnImage”]