Josh Richardson Honors Manu Ginobili After News of His Retirement 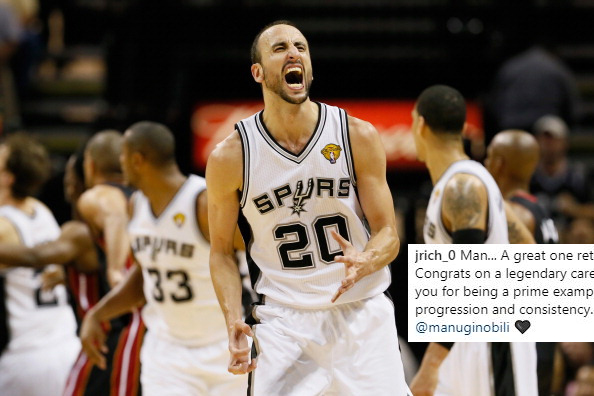 The NBA lost another legend to retirement on Monday when it was announced that longtime San Antonio Spurs guard Manu Ginobili is retiring.

While players on different teams are certainly competitors, there is also a clear sense of fraternity that all players within the NBA feel towards one another. Miami Heat small forward Josh Richardson expressed that sense of fraternity when he took to Instagram shortly after the news of Ginobili’s retirement to honor the potential Hall of Famer.

Man… A great one retired today.. Congrats on a legendary career and thank you for being a prime example of progression and consistency.. Much love @manuginobili ?

Richardson’s caption is as true as it is heartfelt. Throughout his career, Ginobili constantly managed to revamp his game to fit the strengths and weaknesses of his teammates. He was pivotal in the Spurs’ four NBA championships during his career and was named to two NBA All-Star games.

Heat fans everywhere know exactly how impactful Ginobili can be on the game’s biggest stage. In both the 2013 and 2014 NBA Finals, the Heat faced off against the Spurs. The 2013 NBA Finals series was a seven-game battle that will likely go down as one of the better Finals matchups in NBA history.

It is great to see that Richardson has the maturity to honor the past icons of the NBA as they begin the next chapters of their lives.

Considering this post, Richardson is sure to dedicate an even more heartfelt post when Heat legend Dwyane Wade decides to finally hang it up for good.
[xyz-ihs snippet=”HN-300×250-TextnImage”]