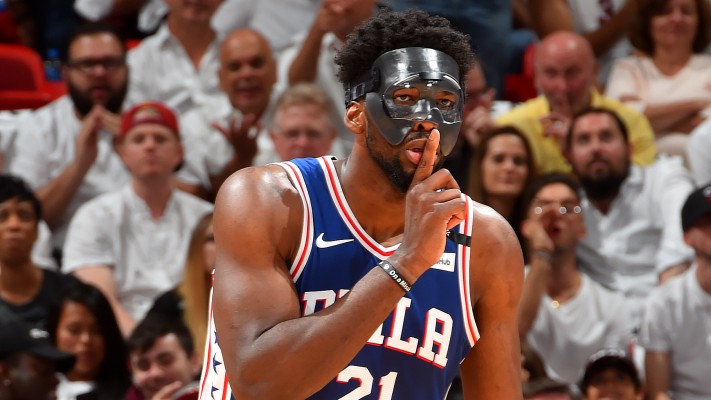 The rivalry between the Miami Heat and Philadelphia 76ers big man Joel Embiid seems to grow with every passing matchup. After Game 3 of the teams’ playoff series on Thursday night, that rivalry took a very large step forward.

Embiid made his playoff debut on Thursday night and put on quite a show, finishing the game with 23 points, seven rebounds, four assists, and three blocks. He did all this with a protective mask that he was forced to wear after suffering a fracture to his left orbital bone several weeks ago.

Perhaps Embiid’s success in the game was why Justise Winslow appeared to purposefully attempt to damage a part of his mask during the game.

Following the game, Embiid unsurprisingly took the time to share his thoughts on the matter.

Embiid on his mask: "As far as the mask, Justise stepped on it and tried to break with his hands. But little did he know we have about 50 of them. It's going to take much more than that to get me out of these series. I'm going to be a nightmare for them too."

With the competition on the court, and the drama off of it, this series is quickly becoming one of the most exciting in the playoffs right now. Winslow posted an impressive double-double with 19 points, 10 rebounds, and two blocks in Game 3.

Though the 76ers managed to pull away late in Game 3, it was a fiercely contested matchup for much of the game. The Heat will have a chance to prove that they’re up to the challenge and even the series at 2-2 in a pivotal Game 4 on Saturday night. While it would be surprising to see Miami attempt to test Embiid’s mask’s strength once again, he’ll probably want some replacements handy just in case.
[xyz-ihs snippet=”HN-300×250-TextnImage”]