James Johnson Reveals What Erik Spoelstra Did to Revitalize His Season 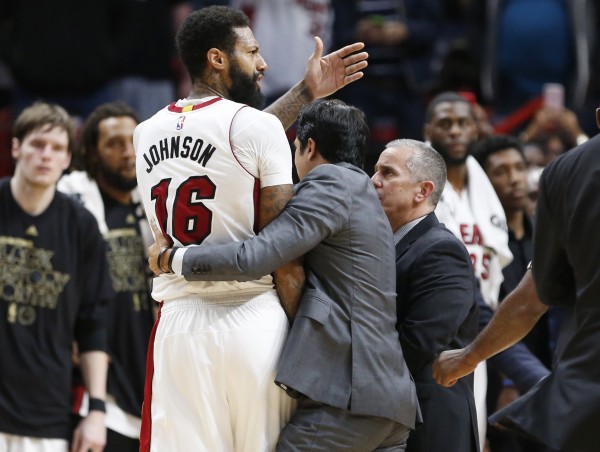 James Johnson is a valuable member of the Miami Heat roster both on and off the court. He offers veteran leadership, and when he is playing at his best, he offers a do-it-all skillset that gives the Heat another edge to win games.

While Johnson had seemingly lost some of his own edge earlier in the season, averaging just 9.5 points per game from December through February, he has noticeably changed his playing style as of late and has the stats to back it up. Perhaps unsurprisingly, the 6-foot-8 forward credits Heat head coach Erik Spoelstra with helping him reclaim his aggressive streak.

Johnson told Barry Jackson of the Miami Herald that he and Spoelstra watched clips of Johnson’s best performances from the 2016-17 season. Johnson said that that was enough to remind him what had been missing from his play at times this season.

“It had nothing to do with offense,” Johnson said. “It was my killer instinct and my doggish ways on the defensive end. That really inspired me, opened my eyes. It enabled me to become the offensive player I’ve become.”

He added that it “not only [sparks me] emotionally, but it gets our team going and inspiring plays get the next guy wanting to make an inspiring play and from there you just lose yourself in the game.”

It certainly seems as though that meeting has had an impact on Johnson’s on-court production. In the month of March, Johnson is averaging 12.8 points, 5.1 rebounds, and 4.2 assists per game. That includes a March 19 game where he led the Heat in a double overtime win over the Denver Nuggets with 31 points and 11 rebounds.

According to Johnson, it was that meeting that helped him reclaim the approach that had helped him have so much success last season.

“Absolutely. Absolutely,” Johnson said. “It’s all about learning what the team needs.”

He’s not the only person in the Heat organization that has noticed his recent uptick, either. Following last Friday’s 23-point performance against the Indiana Pacers, Spoelstra reflected on Johnson’s importance to Miami’s success.

“He’s been playing better for a while,” Spoelstra said late Friday night.

“But it always starts with J.J. with his approach, his habits, his behavior, his leadership — all of that behind the scenes. Once he gets all those things rolling in the right direction, his performance starts to trend that way, as well. He’s been checking all those other boxes and being really the spirit and heartbeat for this group. And sometimes that means scoring, but a lot of times that means facilitating, screening, creating. You saw his versatility tonight, he had to guard one through five and also play the five for us offensively at the end.”

The Heat are just eight games away from the end of the 2017-18 regular season. Johnson will surely look to continue his recent success in those eight games, and then perhaps build upon them as the Heat prepare for what they hope is a long and exciting postseason run.
[xyz-ihs snippet=”HN-300×250-TextnImage”]