James Johnson Comments on Poor Play Since Returning From Injury 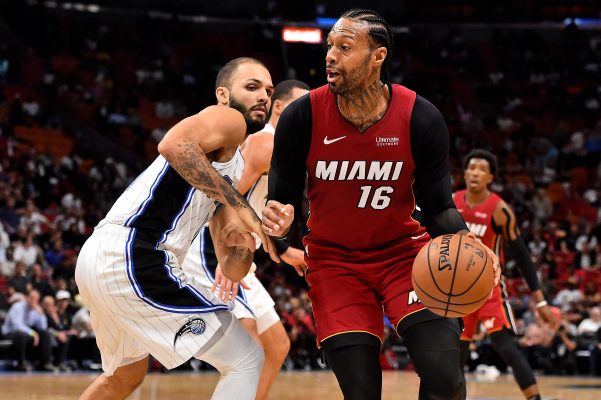 A sports hernia kept Miami Heat forward James Johnson out of action until mid-November. While he’s healthy and back in the starting lineup, he has failed to find any consistency in his first 12 games of the season.

“I’ve just been inconsistent, trying to find my rhythm, trying to find my place on this team again and trying to figure everything back out,” he told reporters following Miami’s 27-point loss in Utah. “At the end of the day, it’s just basketball and I’ve got to go out and play.”

Johnson is struggling, but he’s shown flashes of his old self. He scored 11 points in a loss to the Orlando Magic on Dec. 4, but his best game of the year came in a win against the Los Angeles Clippers on Saturday. Johnson scored 18 points and played a season-high 29 minutes.

Unfortunately, Johnson could not build on that performance. He was held scoreless against the Los Angeles Lakers on Monday and only scored nine in an uninspiring performance against the Utah Jazz on Wednesday.

Heat head coach Erik Spoelstra knows how important Johnson is to the Heat. Spoelstra didn’t expect the forward to immediately return to form, and he also believes the team has some responsibility to help get Johnson going.

“We have to work together to help him,” Spoelstra said. “He’s got to work to find a way to help the team. But we knew it was going to be a process and we know how important he is to our success.”

When Johnson is finally playing well again, he’ll be playing crunch-time minutes in the fourth quarter. For now, getting back to that point is the goal for Johnson.

“My goal is to start playing in the fourth quarter,” he said. “I know I’m not there yet and I know that’s a big responsibility, but I’m willing to work hard and try to get that back.”

Johnson will have another opportunity to turn in a positive performance on Friday when the Heat travel to Memphis to take on the Grizzlies. Miami needs Johnson to be at his best if it plans to turn the season around.
[xyz-ihs snippet=”HN-300×250-TextnImage”]