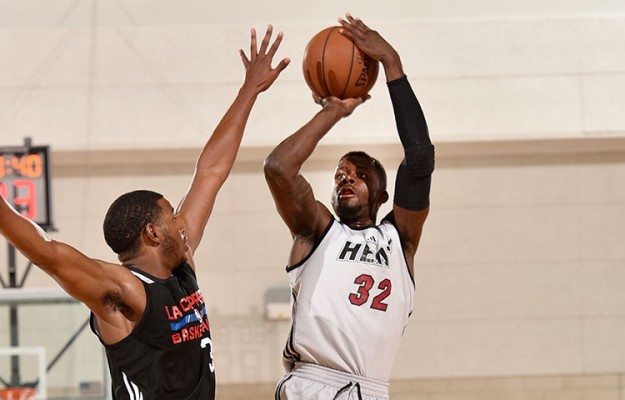 While it appears that one player will stay with the Miami Heat, it would seem another is on his way out.

Despite a disastrous summer league showing, James Ennis appears to be set on a second season with the Heat. Miami has already agreed on plans for Ennis to train at the P3 Peak Performance Project training facility in Santa Barbara, California. In addition, the Heat have scheduled numerous activities for the small forward to partake in extending to mid-August.

Half of Ennis’ contract for the 2015-16 season becomes guaranteed if he’s on the roster by August 1st. If he’s released before then, the Heat don’t owe the 25-year-old any salary for the upcoming season.

While this appears to be good news for the second-year player, the same cannot be said for Mario Chalmers. The veteran point guard is in the midst of heavy trade rumors and it appears that he’s inevitably on his way out of Miami.

Chalmers spoke about the reports regarding the possibility of a trade while hosting a five-day youth camp at Kansas University:

“It’s part of the business. For me, I don’t really think about it. I try to control what I can control, and I’m just working on me and my game.”

The seven-year veteran stressed how he wants to remain in Miami:

“I would definitely love to stay in Miami. I think we have a good chance this year to go all the way. It’s just bringing everything together.”

At the current moment, the Heat have 13 guaranteed contracts for the 2015-16 season. All things considered, they have 18 players vying for 15 active roster spots by late October.

If Miami is to get to that targeted number, they’re going to have to trim the roster. The only way that will happen is by making some trades and/or cuts.

Even if that means parting ways with veterans who have been with the franchise for years.
[xyz-ihs snippet=”Responsive-Ad”]

Featuredjames ennisMario Chalmersmiami heatNews Ticker
← Previous Story Udonis Haslem: ‘We’ve Got as Good a Chance to Win the East as Anybody’
Next Story → An Exclusive Look at Dwyane Wade’s $10.6M Miami Beach Mansion (Full Gallery Inside)