James Ennis: ‘I Know I’ve Gotten Better, But I’m Not Proving It’ 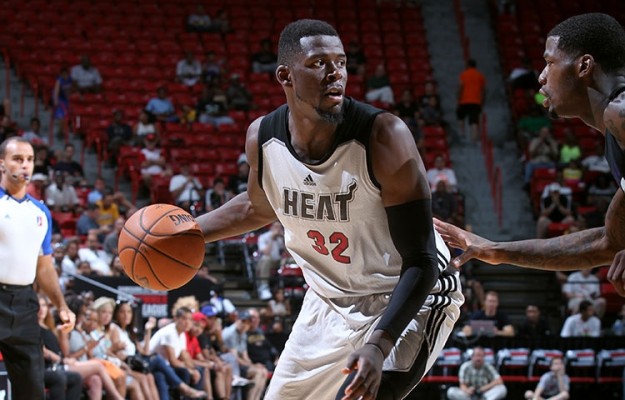 The offseason has gone from bad to worse for James Ennis.

The Miami Heat small forward finds himself on the outside looking in when it pertains to cracking the team’s 15-man roster for the regular season. Not only did Miami add more versatile forwards in Justise Winslow and Gerald Green through the draft and free agency, but Ennis also has had about as bad as a summer league showing as a player could have.

The second-year forward had the following to say about his performance in the summer league this year:

“It definitely bothers me. This is the worst summer league I’ve played. I played better my first year coming from college and from overseas. I know I’ve gotten better, but I’m not proving it. That’s what gets me upset. It seems like I haven’t gotten better.”

Knee tendinitis has bothered him all summer, but Ennis refused to use that as an excuse for his poor play.

At the current moment, the Heat have essentially 18 players vying for 15 roster spots come late October. With an August 1st deadline on the horizon, a large chunk of Ennis’ $845,059 salary becomes guaranteed.

The 25-year-old continued to comment on how he’s likely overthinking things:

“I have no answers right now. I don’t have a clue [why this is happening]. I’m probably overthinking things. I’m probably not playing with a clear mind. My mind is cluttered, so it’s taking away [things] I’m good at.”

The former second-round draft pick continues to remain optimistic in spite of his recent struggles. He hopes his chemistry with Goran Dragic will help his case in making the team:

“He plays at a fast pace like me. He runs, I run. Once he came to the team, that’s why I think I got more transition points. I can run on the side of him. That’s a good plus.”

While Ennis once appeared to be a key piece of the Heat’s future, it now seems he may have his work cut out for him when it pertains to making the 15-man roster for next season.

Ennis acknowledges that the roster situation is a frequent thought that weighs on him:

“Everything enters my mind.”

Only time will tell if the Heat truly value Ennis as a building block for the team’s future.
[xyz-ihs snippet=”Responsive-Ad”]

Featuredgerald greenGoran Dragicjames ennisJustise Winslowmiami heatNews Ticker
← Previous Story Chris Bosh: ‘I Think We’re As Good As Anybody in the League’
Next Story → Udonis Haslem: ‘We’ve Got as Good a Chance to Win the East as Anybody’