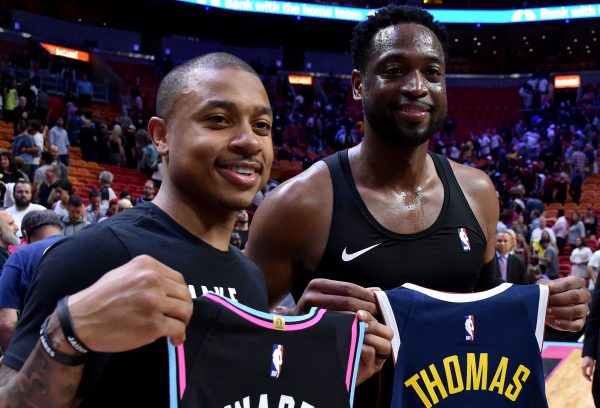 On an Instagram post on Wednesday morning, Thomas not only thanked Wade for being an incredible competitor, but for being a fantastic former teammate as well.

So dope to be able to compete against one of the best players to ever play this game. The coldest part was being able to call you a teammate, I got to see first hand how GREAT you really are fam. Appreciate the game you’ve given me and the inspiration you’ve given all of us who play this game killa @dwyanewade #OneLastDance #Flash

Thomas and Wade both played on the Cleveland Cavaliers last season before the deluge of pre-deadline trades the Cavs made. Thomas was sent to the Los Angeles Lakers, and Wade was of course sent back to Miami.

Thomas has yet to play a game so far this season, as he is still recovering from hip surgery that he underwent last season. Still, it seems he made sure to have a jersey on hand following Tuesday night’s matchup between the Heat and Nuggets so that he could take part in a jersey swap that has now become customary for Wade following each game.

Wade and the Heat will face off against the Nuggets again in just over a month, on Feb. 11. Hopefully, Thomas will be back on the court by then so that he can face off against Wade one more time before the three-time NBA champion calls it a career.
[xyz-ihs snippet=”HN-300×250-TextnImage”]