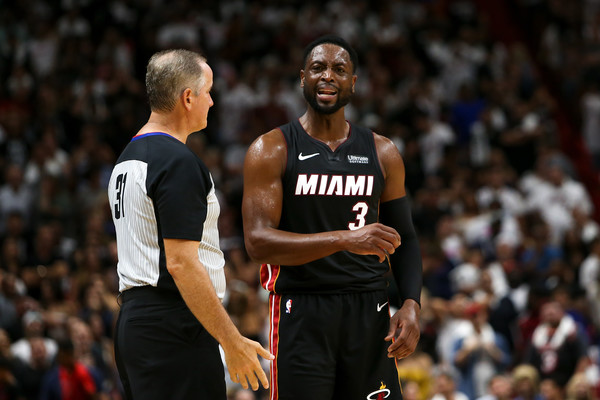 Although Dwyane Wade has been the face of the Miami Heat for over a decade, it appears the team still doesn’t know how to spell his name right.

While Wade was speaking to Heat Nation on Saturday night, the media crew spelled his name wrong on the big screen.

The error came before the Heat’s first home game of the regular season against the Charlotte Hornets. It occurred while the 36-year-old was addressing the crowd for the final home opener of his storied career.

While the embarrassing mistake surely caused some laughs before the match, Wade was all business once the game started. The 6-foot-4 guard put up a season-high 21 points and two blocks on 60 percent shooting from the field. Unfortunately, the Heat lost the game to the Hornets by just one point.

Still, the close game portrayed an encouraging glimpse into what Wade can offer this season. Although the veteran is on the edge of retirement, he has a ton left in the tank. Fans shouldn’t be surprised when Wade conducts masterful performances and helps lead the Heat to victories.

The team is only three games into Wade’s last season in the league. Hopefully, they’ll spell his name right before it’s all said and done.
[xyz-ihs snippet=”HN-300×250-TextnImage”]