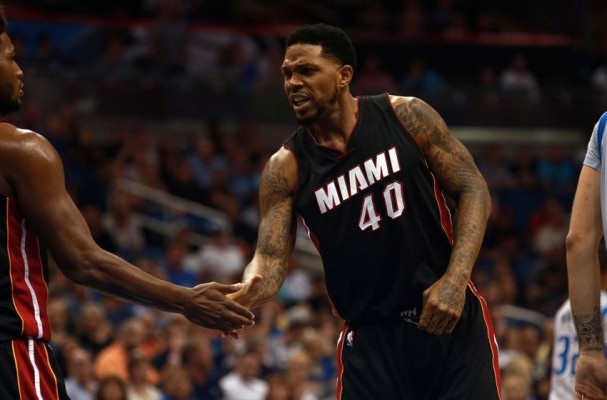 The Chicago Bulls’ new star shooting guard is already winning games for his new team. In the Bulls’ season opener against the Boston Celtics on Thursday, Dwyane Wade put on a shooting display from beyond the arc that even Miami Heat fans have rarely seen.

Wade finished the evening shooting 4-of-6 from beyond the arc and contributed 22 points, six rebounds, five assists. He also hit a dagger three to ice the game with 24.6 seconds left to give the Bulls a 105-99 win over the Celtics.

.@DwyaneWade with the CLUTCH bucket! ??? https://t.co/1uSWCnRFgC

Obviously, watching Wade make winning shots for any team other than the Miami is tough for Heat fans. His newfound accuracy from three-point range was rarely seen in Miami. Wade shot 7-of-44 from deep during the regular season last year before heating up in the playoffs against the Charlotte Hornets. In his 13 years in Miami, Wade was a a mere 28.4 percent three-point shooter.

Wade’s old Heat teammates and coaches were watching his performance and they were just as surprised as most fans were. Head coach Erik Spoelstra compared his shooting to Atlanta Hawks veteran three-point specialist Kyle Korver.

“Shoot, he looks like Dwyane Korver right now,” Spoelstra said. “Dwyane can shoot. Don’t let that fool you. He would put up those kind of numbers in the playoffs when it really mattered, when defenses tightened up.”

Heat guard Tyler Johnson says he couldn’t recognize the guy wearing No. 3 for the Bulls.

“I was definitely happy for him,” Johnson said of Wade. “He must have been working on his three-point jumper all summer because I didn’t see a whole lot of that until the playoffs last year. It was crazy. I didn’t recognize the guy.”

There is no question that Wade has put in a lot of effort working on his long ball, especially due to longtime friend and confidante Udonis Haslem vouching for his post-practice work. Haslem was not surprised to see Wade hitting clutch shots at the end of last night’s game.

“Not strange watching Dwyane Wade hit a clutch shot down the stretch,” Haslem said. “I think I’ve seen that a couple times. Just the jersey different. He didn’t make a shot against the Heat, so I’m happy for him.

“He told me he was working on that, shooting a lot after practice and changed a few things and took a few pointers from (Fred) Hoiberg.”

Most Miami fans will probably cheer for Wade’s success in Chicago as long as it doesn’t hurt the Heat. If Wade continues his strong play, his return to South Beach on Nov. 10 will definitely be one of the most anticipated games of the season.
[xyz-ihs snippet=”Responsive-ImagenText”]