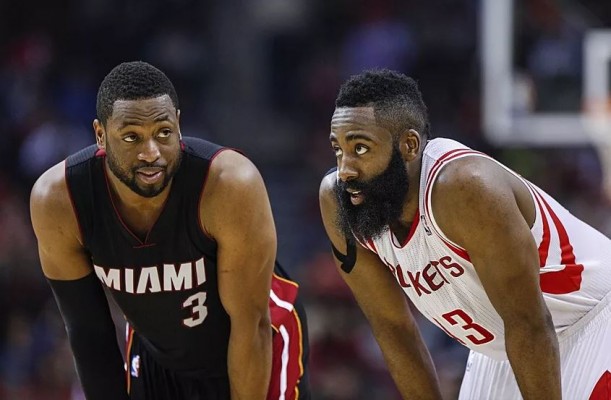 As the last few days of the 2017-18 NBA regular season wind down, both players and coaches for Miami Heat are getting set for what they hope will be an extended playoff run. In the interim, nine members of the team and head coach Erik Spoelstra took a look ahead after Sunday’s practice at the annual NBA awards that will be handed out in the coming weeks.

James Harden of Houston received five votes, with two other players suggesting a split with either Cleveland’s LeBron James or Russell Westbrook of Oklahoma City. Adebayo was uncertain, but suggested a three-way tie might be the best choice.

“His team is the best team in the league right now,” Dragic said. “He’s playing unbelievable. It’s not only about the numbers, but the result first and then how you make your teammates better. He’s doing that. Not only this year, but last year.”

One player who didn’t vote in this category was Wade, a close friend of James:

“You want me to answer? Not doing it. Leave it in my player vote that is secretive,” Wade said.

Johnson was the lone player to select James:

“He could get it every year, it’s just voter fatigue,” Johnson said. “I mean you could also give it to James Harden just because of their record, having the No. 1 record overall. I mean he’s had a great year offensively. I just think Bron because he’s at the top of the league on both ends of the court. Whatever age, he’s averaging a damn near triple-double on the court. It’s hard not to give it to him. Just because of the amount of attention he demands day in and day out and how smart of a player he is.”

Rookie of the Year

The only two players mentioned in this category were Philadelphia’s Ben Simmons and Utah’s Donovan Mitchell, with Simmons garnering a slight 4-3 advantage. Three others suggested a split of the award between the two.

“The way he controls the game, his rookie and his pace and how effective he’s brought himself to be is crazy,” Richardson said. “Obviously one of the best rookies in a long time.”

Meanwhile, Adebayo made the case for Mitchell:

“He’s done so much stuff for their team,” Adebayo said. “They’ve won like 17 of 18 or something like that. He’s the first rookie to ever do that. He’s the anchor of their offense. With all due respect, he’s had multiple 30 point, 40 point games, just off the chart scoring. To come from some place like Louisville where some people would say he wouldn’t make it, his back story. I feel like he deserves it.”

Indiana’s Victor Oladipo received eight of the nine votes casted, having kept the Pacers afloat after coming over in the deal that sent Paul George to Oklahoma City. Winslow was the only Heat player to go in a different selection, choosing Orlando’s Aaron Gordon.

“Just how he became a leader,” Dragic said. “No one even considered Indiana a playoff team this year. He put them on his shoulders. He’s basically balling this year. He’s definitely most improved player.”

Coach of the Year

Three coaches were named among the collective ballots, with Philadelphia’s Brett Brown receiving the most with four. Brad Stevens of Boston picked up two votes and was named along with Toronto’s Dwane Casey on another.

Johnson made an emphatic case for Brown:

“To take what was the laughingstock of basketball,” Johnson said. “It was a joke really how people viewed the Philadelphia 76ers the last couple years with everything going on and how it felt like every year they were tanking to get the No. 1 pick. What he’s been able to do the last couple years and endure the criticism and winning like 18, 19 games throughout the year to being the No. 3 team in the East, that’s impressive.”

Official ceremonies for the awards will take place on Monday, June 25 in Santa Monica.
[xyz-ihs snippet=”HN-300×250-TextnImage”]