Heat Are Ready To Move On Without LeBron 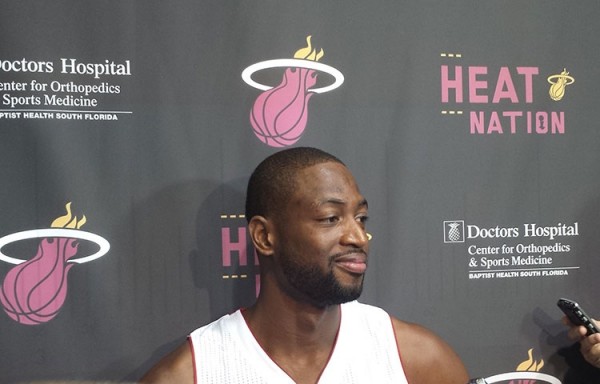 LeBron James moved on from the Miami Heat when he announced on July 10 that he was taking his talents back to the Cleveland Cavaliers.

After the Heat held their annual media day on Friday, it would appear they’re ready to move on too. In Miami’s first opportunity as a team to respond to James’ decision to depart from South Beach, the reoccurring sentiment was that they are ready to look toward the future.

Mario Chalmers, who was much maligned for his point guard play during the 2014 NBA Finals loss to the San Antonio Spurs, even went as far as to not refer to LeBron by his actual name. Chalmers made multiple references to ‘The King’ as “that guy” during media day. The veteran PG’s full quote is as follows: “It’s going to be the same even though we don’t have that guy.”

And so it begins. Chalmers refers to LeBron as “that guy” at Heat media day. Photographer said Chalmers appeared “regretful” about comment.

To add even more to the rhetoric, Head Coach Erik Spoelstra spoke about the void James left with his departure: “That team, that chapter is closed. Going back to that? My mind is so far from that.” Spoelstra followed that up by stating it took the organization just 10 minutes to get over the fact that LeBron was leaving.

And so it begins. The Heat sent their message loud and clear to the media and the NBA universe—we’re ready to contend without the best player in the world.

While actions speak louder than words, and the franchise won’t receive their opportunity to answer the doubters until October 29, the entire Heat team handled their first media day in the post-LeBron era as well as they possibly could. From Chalmers to Spoelstra, to new players such as Josh McRoberts, every single player on the roster that answered questions in regards to LeBron responded with a chip on their shoulder.

Ira Winderman of The Sun Sentinel caught an interesting quote from Dwyane Wade: “There’s no hangover. Everyone in the organization had the time to get used to the idea it’s going to be a different team.”

Winderman also noted via his Twitter feed that Spoelstra spoke for 26 minutes and mentioned LeBron’s name just once during that span.

While the majority of observers have dismissed the Heat as championship contenders, the team won’t go into the season with that negative mindset. The roster still believes it can win a championship without the four-time MVP. The sentiment is loud and clear in this video via CBS Miami, while focusing on the Heat’s media day:

Via the video, Jim Berry of CBS Miami asks McRoberts if it was a letdown that he wouldn’t be playing without LeBron. The newcomer was defiant with his answer: “No, I think he would have been a great guy to play with. But at the same time, I have a lot of great teammates over here (in Miami).”

The Heat responded with all of the right words during Friday’s media day. However, the question remains whether they’ll respond with wins in the era after LeBron.