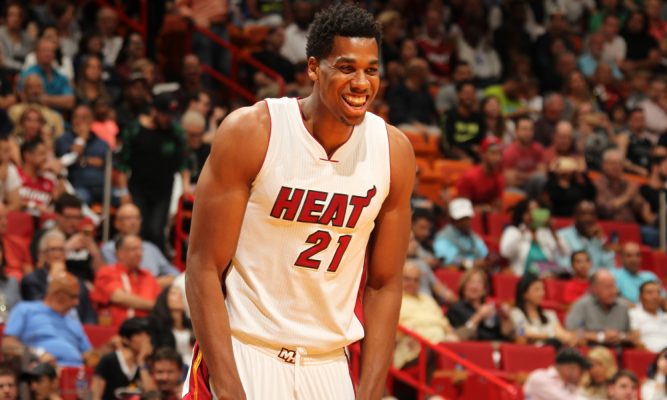 The road taken by Miami Heat center Hassan Whiteside to sign a huge contract in 2016 wasn’t always the smoothest route, with side trips to play overseas part of the overall package. Along the way, there were some humorous moments, including his tenure in China that saw him fall victim to a mischievous competitor’s better grasp of that country’s language.

Whiteside was the subject of a profile in The Ringer by Haley O’Shaughnessy, which recounted the big man’s communication problems in trying to connect with the vast Chinese audience:

“In China, he was unable to communicate, and therefore out of his element. A player from another team taught Whiteside how to greet: ‘Wǒ shì nǐ bàba’—hi, nice to meet you. He said it to everyone at home, on the road, in the gym. There were never any ‘you, too’s’ in return, only blank stares. Well into the season, Whiteside found out from his team’s general manager that he was actually saying ‘I’m your daddy.’ Whiteside immediately recognized the player in the layup line a year later, after he had left for Lebanon again, then returned back to China. He wishes he had dunked on him. Wǒ shì nǐ bàba.”

Playing in such a distant land was one of Whiteside’s few options after having been the 33rd overall pick by the Sacramento Kings in the 2010 NBA Draft. Playing just 19 games with the Kings over two seasons, he spent most of his time in the G League before being released in July 2012. After two years overseas, he signed with the Memphis Grizzlies, but ended up being cut twice by them before being signed as an inexpensive option for the Heat in November 2014.

Following some additional time in the G League, Whiteside blossomed into a force in the paint who averaged a double-double every game. That led to a four-year, $98 million deal with the Heat in July 2016. After putting up career-high numbers in points and rebounds during that first year, including leading the league in the latter category, his career hit another bumpy patch last season because of injuries and continued inconsistency.

That slide has made the 29-year-old Whiteside available on the trade market, though the remaining $52 million left on the final two years of his contract hasn’t brought many interested parties. The Heat need him to go back to being a scoring force that can also rebound and block shots. If he can do that, he might legitimately be able to say to other teams, “I’m your daddy.”
[xyz-ihs snippet=”HN-300×250-TextnImage”]