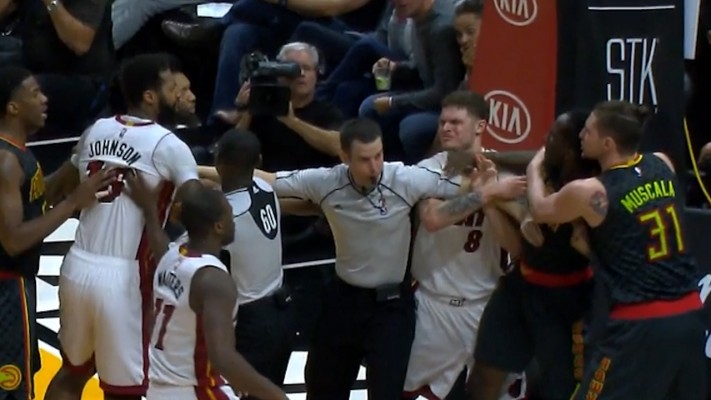 Miami Heat big man Hassan Whiteside did not mince words when commenting on Atlanta Hawks rookie Taurean Prince after their on-court incident Wednesday night. As the Hawks were getting blown out at American Airlines Arena midway through the fourth quarter, frustrations boiled over.

Prince pulled down Whiteside while he was in the air attempting to grab a rebound. The grab resulted in a pretty nasty spill on the hardwood that, for a moment, looked like it might have injured the 7-footer’s back.

While Whiteside did not retaliate during the game, he did have some choice words for Prince after the dust had settled:

“Fake tough guy,” he said about Prince. “That’s what happened.”

After Whiteside was shoved to the ground, his teammate, James Johnson, immediately ran over from the three-point line to defend his “brother” by shoving Prince in the chest.

“It was just instincts, instincts of a brother, instincts of a teammate who cares,” Johnson told reporters. “We’re building something here and he was being aggressive and physical. Whiteside went down and that’s all I remember after that.”

Johnson was ejected for his retaliatory shove but he doesn’t regret his actions, because he knows, at the end of they day, he had his teammate’s back when it counted.

“I think I’m just wired like that,” Johnson said about coming to Whiteside’s defense. “Honestly, I don’t think I can beat everybody in the world up. But I’ll take my chances in that situation.”

Chances are, Johnson wouldn’t have had much trouble taking on the Hawks forward either. The Heat power forward is actually a second-degree black belt and a trained MMA fighter with a perfect 27-0 record in competition.

“We always know JJ is going to be there to protect us,” Heat guard Goran Dragic said Wednesday night. “I’m happy nobody crossed that line.”

Johnson is now down $7,000 for the technical foul and subsequent ejection he received, but Whiteside has already agreed to pick up the tab for that. He also claimed he would cover any additional fines Johnson may or may not receive from the league regarding the incident.
[xyz-ihs snippet=”Responsive-ImagenText”]