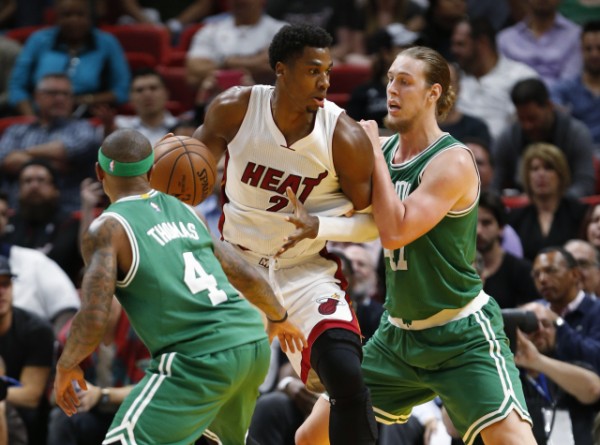 The signing of free agent big man Kelly Olynyk by the Miami Heat is seen as a way to give the team added strength in the paint, as well as an option to stretch the floor because of his shooting ability. How much his long hair has to do with his skills is debatable, but new teammate Hassan Whiteside decided to poke some at Olynyk’s free-flowing mane.

“Long hair. Let the Miami breeze just blow it,” Whiteside said on Saturday when asked which style Olynyk should lean toward. “He’s a little bit under-viewed because he looks like a surfer. But he can definitely play.”

“He’s a versatile big, a big that can shoot, that can stretch the floor and can do a lot of different things. He’s not easy to guard. I think he’s a lot better than what people are giving him credit for.”

Ira Winderman of the Sun Sentinel wrote about Olynyk’s penchant for physical play and how many opponents perceive his actions on the court as those of a dirty player. One of those past controversies involved Whiteside himself, resulting in his ejection from a game and a suspension for the following contest. That scuffle on March 9, 2015, began when Whiteside shoved Olynyk to the ground, for which the Miami big man was immediately ejected for a Flagrant 2 foul.

Despite the heated moment, it was forgotten within hours by both players.

“He apologized right after the game,” Olynyk said. “That was a few years ago, I think before he signed his big deal. I just told him he’s a great player and he’s got superb upside and talent, ‘don’t let emotions or temper of whatever it is, don’t let that hold you back and prevent you from being great. You have a great opportunity.’

“I just want to see him succeed and be great. And he did. Ever since then, we’ve been close. He texted me after I signed my deal and said welcome to Miami.”

Olynyk’s image around the league became even more controversial after the Whiteside scuffle. In Game 4 of the opening round of the 2015 NBA Playoffs, Olynyk and Cleveland Cavaliers forward Kevin Love both reached for a rebound. The end result was Love dislocating his shoulder and being lost to the Cavaliers for the remainder of the playoffs. Despite being seen as a villain by other fan bases, Olynyk makes no apologies for his style.

“As a player,” Olynyk said, “you’re just going out there and trying to play hard every single night, whether it’s practice, a game, individual workout in the weight room. You’re trying to go as hard as you can to be the best player you can every single night. And for me, I’m trying to do what I can to help my team win, whether it’s rebound, pass, shoot, score, set screens, whatever it is, you’ve got to do what you can to help your team come out on top, and that’s what it’s all about.”

One Heat player who’s looking to playing with Olynyk is James Johnson, who agreed to a new deal earlier this week.

“Every time I see him goes out there and play, he plays as hard as he can. I don’t see him doing too much jawing or anything like that,” said Johnson. “He just lets his game do the talking. Getting into little physical altercations and all that, that’s part of the game. And me, personally, I love it. So I’m all for that.”

Miami fans used to jeer Olynyk, no doubt focusing much of their venom on his hairstyle. Now, however, they have no preference about which style he chooses, as long as it helps deliver victories for the Heat.
[xyz-ihs snippet=”HN-Native-EndofArticle”]