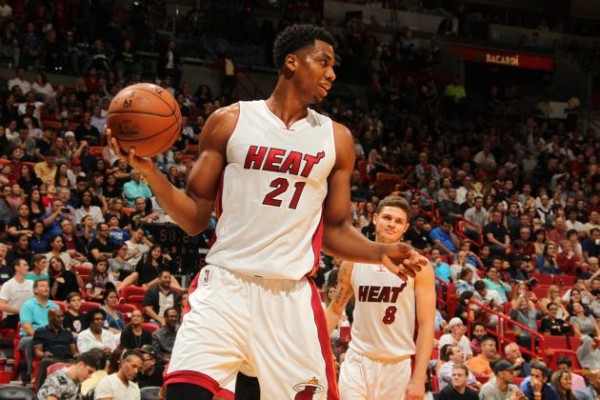 Even as the losses pile up for the Miami Heat, Hassan Whiteside is beginning to understand his role as the Heat’s franchise player.

In losses to the Cleveland Cavaliers and Atlanta Hawks, Whiteside only contributed eight points in each game and was not his usual dominant force on the boards. Heat head coach Erik Spoelstra benched Whiteside in the third quarter for his effort in the 114-84 loss to the Cavaliers.

In response to the hasty decision-making, Spoelstra simply said that it was a “coaching decision,” and that he and Whiteside talked the next day about his performance.

The 7-footer evidently heard the coach loud and clear as he followed up the putrid effort, by contributing 20 points, eight rebounds, and three blocks in the Heat’s 105-100 loss to Dwyane Wade‘s Chicago Bulls. Even though the result was same as rest of the road trip, Whiteside, battling a sore hip and knee, played with much more energy.

“It was tough,” Whiteside said. “I wasn’t 100 percent, but I just tried my best to tough it out. Basically the team kind of just needed it. Whatever I could give, I tried to give. You got to do that sometimes.”

This resiliency came after Goran Dragic hinted that Whiteside might need to play through smaller injuries.

“I cannot say about somebody else what his body [can do]. He knows the best, if he can play or not,” Dragic said. “But I know for me, I have a high pain tolerance, so I can do it. I cannot answer that question.”

Whiteside’s attitude gives Spoelstra reason to believe that his big man is starting to understand what the Heat need from him every night.

“It’s just all about development and his understanding of how important he is to this team,” Spoelstra said. “And on all levels. I mentioned it so many times before this. He’s starting to see what that actually means and what that feels like. It is a big responsibility and that’s what he signed up for.”

Through 24 games this season it has become clear that in order for the Heat to have a chance of amassing a respectable record, they need Whiteside to be dominant on both ends of the court. When he signed his $98 million dollar deal, Whiteside became the face of the Heat franchise. Now it’s his turn to prove it on the court every single night.
[xyz-ihs snippet=”Responsive-ImagenText”]