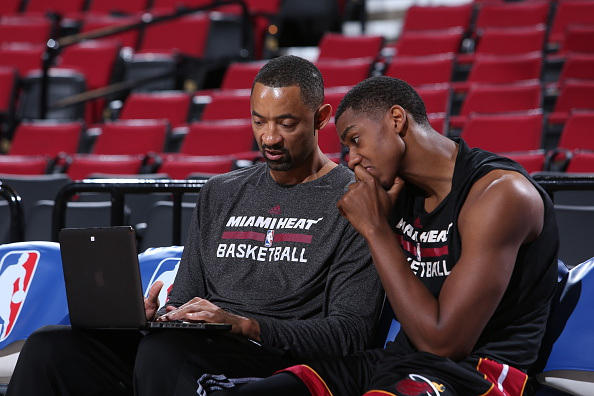 Hassan Whiteside is probably the game’s premier defensive player at the center position.

Despite having just 95 career games under his belt, the Miami Heat center has established himself as a defensive force. Whiteside currently averages 4.0 blocks per game, which is the best number in the league by more than a block per contest. His 11.1 rebounds per game also ranks him fourth in the league.

While Whiteside may not even be a Heat center past this season—he’ll be a free agent in the summer of 2016—there are two recognizable faces from within the organization who continue to influence Whiteside’s on and off-the-court development.

It’s a real simple plan—assistant coach Juwan Howard helps mold Whiteside on the court by tutoring him on how to play in the post, while vice president of players programs, Alonzo Mourning, gives him guidance off the court.

Ira Winderman of The Sun Sentinel described it best in his piece regarding the continued growth of the Heat’s young center:

“In this case, coach Erik Spoelstra does the talking about this process, the Heat’s preference to keep other voices out of the public equation, lest mixed signals get in the way. For Whiteside’s dual enrollment, Howard handles the court clinics, Mourning the life lessons. This is how the Heat are attempting to build a better center.”

This is all in an effort to not only continue to improve the young center as a player, but to persuade him to re-sign with the Heat when Whiteside becomes a free agent next summer.

Head coach Erik Spoelstra commented on the relationship between Howard and Whiteside:

In regards to Mourning’s influence, Whiteside stated that he receives more of a mental instruction from the former two-time Defensive Player of the Year:

“It’s more off-the-court stuff we talk about. It’s staying positive, not getting too down, if you have a bad game. Or if I have a great game, don’t get too high. Just keep putting in the work and everything is going to be OK.”

By receiving guidance from two great former players in Mourning and Howard, there is little doubt Whiteside is going down the right path as the Heat’s starting center.

The question is, will it be enough to ensure that Whiteside remains in a Heat uniform for now and the near future?

Pat Riley and the front office will play a role in that decision when the young center becomes a free agent in July.
[xyz-ihs snippet=”Responsive-Ad”]