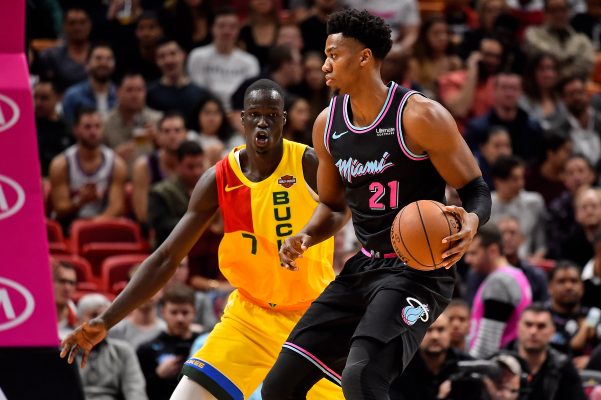 In the latter stages of their fourth straight win on Saturday night, the Miami Heat used a 2-3 zone defense to help shut down the Milwaukee Bucks and come away with a 94-87 victory. Heat center Hassan Whiteside expressed enthusiasm about the new strategy, saying it works well with his assets.

Whiteside hadn’t played zone defense since his high school days and indicated that had Syracuse University recruited him, he would have gone there because of its use of the defense. He explained his reasons after the game:

“I love playing the zone. It’s so easy for me to play a zone. All that length [that opponents must deal with]. I’ve got a 7-9 wingspan. Our length takes up the whole court.”

Offering a little more insight into what makes the zone so effective, Whiteside said it deals more with the mental aspects of the game:

“It frustrates [opponents]. They’re not used to it.”

While the Bucks were playing on the road for the second consecutive night, the Heat’s defensive ability has seen them hold their last four opponents, as well as six of their last 11, under 100 points. The Bucks shot just 37 percent from the outside for the game and 21 percent from beyond the arc.

Despite those numbers, Saturday night’s game was still in doubt with three minutes left. Miami was clinging to an 84-81 advantage when it went exclusively to the zone, which led to an immediate 8-2 run to seal the victory.

Having won eight of their last 11 contests, the Heat will seek to stay in that positive groove with a Sunshine State road battle on Sunday night against the Orlando Magic.
[xyz-ihs snippet=”HN-300×250-TextnImage”]