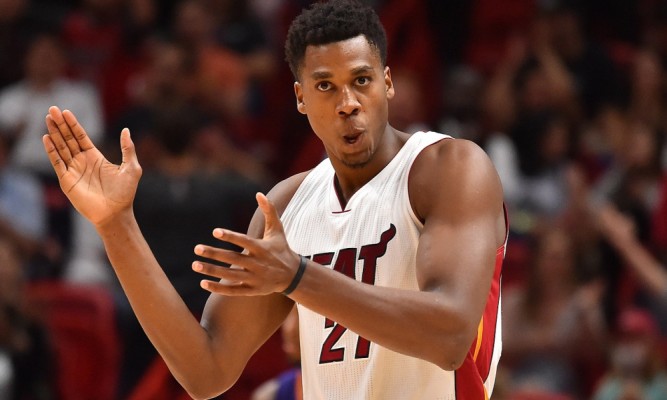 The NBA career of Miami Heat center Hassan Whiteside has developed exponentially over the past few years, turning him from a player trying to simply play in the league into one that signed a huge free agent contract in July 2016. In this year’s opening game, Whiteside got off to a huge start by notching the eighth 20-point, 20-rebound performance of his career.

Alex Kennedy of Hoops Hype interviewed Whiteside about his rapid development and his expectations for the upcoming season. Between Whiteside’s two stints in the NBA, he played overseas in China and Lebanon and also competed in the G League prior to his signing with the Heat.

“Some of the lowest points of my life came when I was getting cut,” Whiteside said. “Getting cut [by the Sacramento Kings in 2012 and Memphis Grizzlies in 2014], I knew I’d have to go overseas or go to the D-League and have to try to fight my way back into the NBA. Those were definitely some of the low points in my life.

Those humbling experiences have helped establish a strong work ethic as he continues to improve his overall game. He was asked by Kennedy about any advice he could impart to others who are now in the same situation he was in just a few years ago.

“View every day as a day to get better. Giving up isn’t going to do anything,” Whitside said. “You don’t want to look back on your career and say, ‘I gave up,’ or wonder [what could have been]. Every day, you have to work toward your dream and try to get better at this thing that you love. And eventually, those days add up to weeks, those weeks add up to months and those months add up to years. You’ll keep getting better. If you come in with the right mindset and push your body and work hard enough, you’ll be rewarded.”

Whiteside also expressed the opinion to Kennedy that he’s improved, but remains intent on building on that rise:

“I feel like I’ve gotten a lot better, man. And not just when it comes to the things like scoring or rebounding, but also understanding the game better, making the right plays and communicating with the guys. I think I’ve grown a lot.”

The debate about which NBA center ranks at the top isn’t something that Whiteside dwells on, yet he realizes that his play will likely be reflected in any team success.

On the latter subject, the 7-footer remains confident that the Heat will finish this season with at least 50 wins.

“Personal goals don’t really matter if the team goals aren’t met,” Whiteside said. “You can have all these big numbers and do a whole lot, but if your team loses, they aren’t going to give you any accolades.

“As a team goal, I’m always going to want to go for that championship. I think this is a 50-plus-win team. I’m not getting caught up in [our loss to Orlando]. The defending champs lost their first game, so I’m not getting caught up in us losing our first game. I believe in these guys and I know these guys believe in me, so we’re just going to keep rolling.”

Injuries ended up costing the Heat a playoff berth last year when they finished with a 41-41 record. Whiteside will be one of the central components in determining whether or not the team reaches his specific goal. However, he needs to get back on the court after sitting out the past few games due to injury. Next up for the Heat is a Saturday night home matchup against the Boston Celtics.
[xyz-ihs snippet=”Responsive-ImagenText”]