Hassan Whiteside Nominated for NBA’s Block of the Year 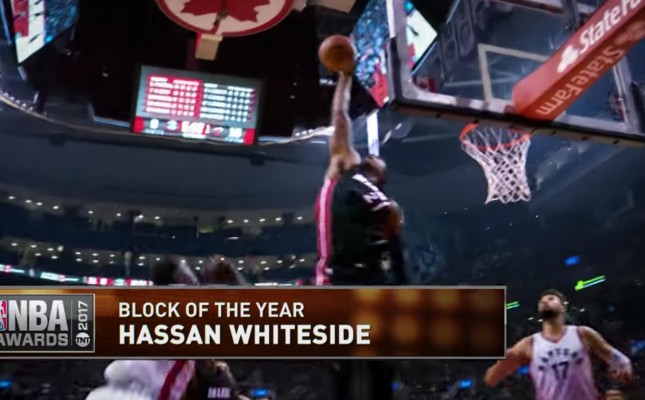 The prowess in the paint of Miami Heat center Hassan Whiteside has been evident to the team’s fans over each of the past two seasons, especially when it comes to his superior blocking ability. That skill could be rewarded near the end of June, when the NBA conducts its first-ever postseason awards show.

That event, which will take place in New York on June 26 and be broadcast on TNT, will take into account some of the most impressive moments of the past season. For Whiteside, that means his block last November will be among three selections up for Block of the Year.

It's been announced @YoungWhiteside is a candidate for NBA #BlockOfTheYear!

The block came during a Nov. 4 road loss against the Toronto Raptors at Air Canada Centre. With 5:35 left in the first quarter, Toronto’s Pascal Siakam put up a six-foot hook shot that Whiteside not only blocked but also collected the rebound on approximately a second later. That block would be Whiteside’s only rejection of the game, though he finished with 161 on the season, one year after he led the NBA in that category.

Whiteside’s two competitors in this category will be San Antonio’s Kawhi Leonard and New York’s Kristaps Porzingis. Leonard had a block against Houston’s James Harden that saved a victory for the Spurs, while Porzingis’ effort mirrored Whiteside’s, since he blocked and then rebounded the shot of Brooklyn’s Spencer Dinwiddie.

No other Heat player has been nominated, and the 2017 NBA Awards will also present awards for Assist of the Year and Dunk of the Year, among other categories. In addition, the standard Most Valuable Player, Rookie of the Year and other traditional awards will be part of these inaugural ceremonies.

Last July, Whiteside signed a four-year, $98 million contract with the Heat, though the final year in 2019-20 is a player option.
[xyz-ihs snippet=”Responsive-ImagenText”]