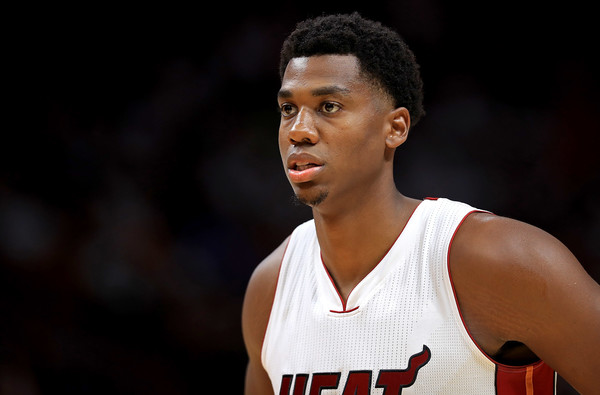 It looks like NBA general managers are not giving Hassan Whiteside the respect he deserves, again.

That’s because in a recent general manager survey by NBA.com, Whiteside did not a get a single vote for the question asking, “Who is the best center in the NBA?” Players like DeAndre Jordan, DeMarcus Cousins, Anthony Davis, Marc Gasol, Karl-Anthony Towns, and Draymond Green all received votes.

According the Barry Jackson of the Miami Herald, Whiteside had some choice words for those general mangers:

“I don’t really care what those GMs say,” Whiteside said. “99 percent of them said no to me anyway, so I don’t expect them to come back and say, ‘No, he’s good,’ after we said no.

“If I listened to what everybody said about me, I would probably be in the YMCA still. I never got any just due in my career but I don’t steer away from what I’m going to do with the Heat.”

It’s clear that, even after signing his $98 million contract, the chip on Whiteside’s shoulder has not grown any smaller. He’s using snubs like this NBA.com poll to motivate himself and keep playing at a high level.

Head coach Erik Spoelstra said last week that he had no problem with this team using people’s doubts as motivation to fuel itself. But he doesn’t want it to stop there.

“I’ve said this for a long time, that I’m OK with players using that for motivation,” said Spoelstra. “But if we’re going to have the type of season that we want to have, our motivation has to be much deeper than that. It has to be about caring about each other, serving each other, about playing for the next guy, finding a way where you can really enjoy someone else’s success.”

In Whiteside’s case, if he keeps playing at this level there is no chance anyone in the NBA will doubt his abilities as a dominant big man. After just three games, he is averaging 21.7 points, 14.7 rebounds, and 3.3 blocks while shooting 64.3 percent from the field.

He will have a chance to continue his strong play against one of the most dominant centers in the league when the Miami Heat take on the Sacramento Kings on Tuesday.
[xyz-ihs snippet=”Responsive-ImagenText”]