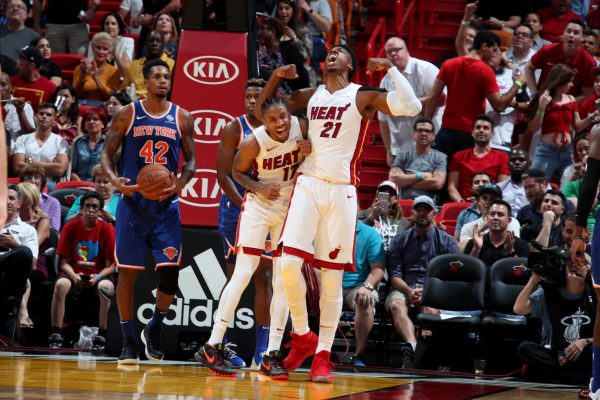 After putting on a dominant display in a blowout victory over the New York Knicks, Miami Heat center Hassan Whiteside reportedly went over to New York rapper and noted Knicks fan Fat Joe to apologize about the state of his favorite basketball team.

Hassan Whiteside apologized to Fat Joe after the game about the current state of the Knicks. This rivalry is downright gentlemanly now.

According to Whiteside’s own Instagram post following the game, it seems he and Fat Joe are close friends. The Bronx rapper got a shoutout in Whiteside’s caption along with DJ Khaled and Heat legend Chris Bosh.

Great First Home Win with my teammates! Shoutout to #Heatnation for all the energy they brought to arena! It was also great to have a few of my Brothers in attendance @djkhaled @fatjoe @chrisbosh #LetsGo

The post-game apology was a pretty classy move for the 7-foot center who could have easily relished in the 23-point victory. Perhaps Whiteside felt compelled to do so because he felt so personally responsible for the huge win. In the game, the former second-round pick dropped 22 points, grabbed 14 rebounds, and recorded three blocks.

While Whiteside’s numbers from the Wednesday night’s game definitely jump off the page, it wasn’t anything new for the big man in the 2018-19 season. In four games, Whiteside has now recorded four double-doubles. With solid play on the court, and a lack of distractions off of it, he is proving just how impactful he can be when things are clicking.

Hopefully, Whiteside will have many more performances where he feels compelled to apologize to the opposing fanbase from here on out.
[xyz-ihs snippet=”HN-300×250-TextnImage”]