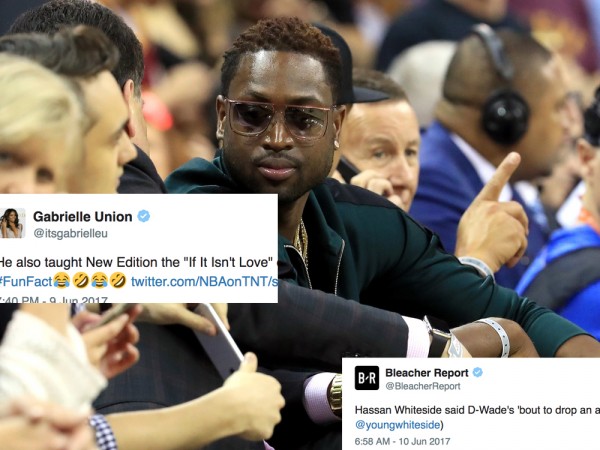 Dwyane Wade decided to stop by Quicken Loans Arena on Friday night to support his friend and former “Big 3” era teammate LeBron James. In the second quarter, the TV broadcast took a close up shot of Wade, showing millions of viewers what he was wearing. And that’s when social media took over to have some fun at Wade’s expense.

Former teammate and current Miami Heat center Hassan Whiteside joined in on the fun, noting that Wade looked like an artist ready to drop a new album.

In addition, most of the internet comments noted that Wade looked like a ’90s hip-hop star.

Why is @DwyaneWade out here looking like @MCHammer in '92? #NBAFinals pic.twitter.com/vHOPbUw1b5

Wade’ wife, actress Gabrielle Union, also got in on the fun.

He also taught New Edition the "If It Isn't Love" choreography #FunFact???? https://t.co/zx2t3Ts6ve

There was even a striking comparison to famous TV character Paulie Walnuts from “The Sopranos.”

Who wore it better? pic.twitter.com/OHNzBgGM1T

Although Wade’s most memorable NBA Finals moments have taken place wearing a jersey, this outfit will be hard to forget.
[xyz-ihs snippet=”Responsive-ImagenText”]