Goran Dragic Ranked at No. 38, Dwyane Wade at No. 46 in ESPN’s NBA Rankings 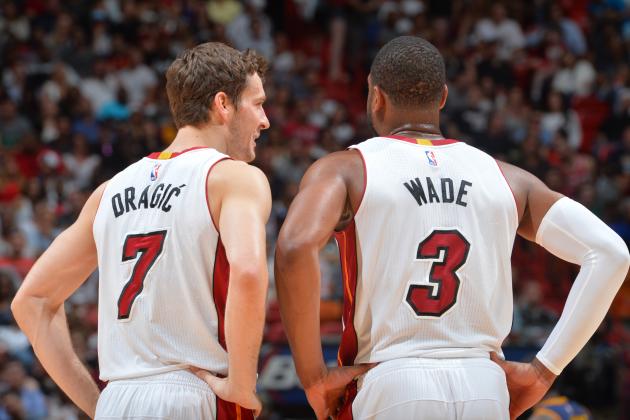 Miami Heat fans won’t be too pleased with ESPN’s ranking of the top players in the NBA.

In ESPN’s NBA rankings, Dwyane Wade was ranked as the 46th-best player in the league, while Goran Dragic came in at No. 38. While the Dragic ranking seems fair, the low listing of Wade seems a bit odd, especially considering he was ranked at No. 36 in last year’s list.

The 33-year-old shooting guard is coming off of a resurgent season which saw him rank third in the Eastern Conference in points per game (21.5). He led the Heat in scoring for the first time since the 2009-10 season.

ESPN had the following to say in defense of their ranking of Wade at No. 46:

“Wade missed 20 games last season due to injuries, and his field goal shooting plummeted to a seven-year low of 47 percent while his turnovers skyrocketed to 3.4 per game. Wade did bump up his scoring average to 21.5 points per game, but that was due to volume, not efficiency.”

Though his field goal percentage did drop, the 13-year veteran also carried a team that was absolutely decimated by injuries. Furthermore, his turnovers went up due to his usage percentage skyrocketing to 34.7 percent, which ranked second in the NBA.

“Dragic is an uptempo point guard who played for a team that didn’t like to run. That might change, but when The Dragon gets a full head of steam, there’s no stopping him. With great body control and touch around the rim, he shot 69 percent on shots within four feet, a scorching mark for someone his size.”

With the Heat expected to contend for a title in 2016, both players will have to play a lot better than what their ranking on ESPN suggests.
[xyz-ihs snippet=”Responsive-Ad”]