Goran Dragic Outperforming Dwyane Wade in the Clutch This Season 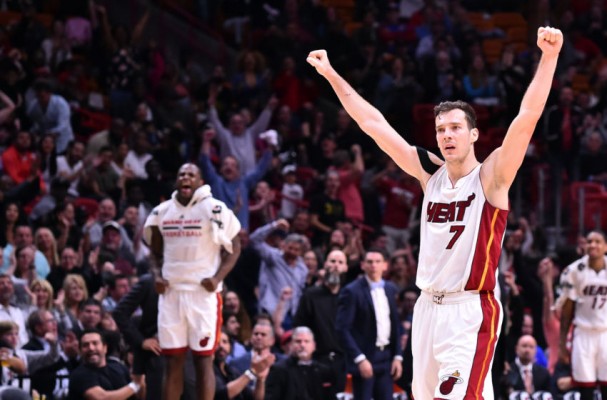 The concept of clutch shooting has always been a source of debate, though the actual statistics of the Miami Heat can offer a way of separating opinion from fact. One such fact is that this year’s clutch numbers (based on shots attempted and made when the margin is five points or fewer at some point in the final five minutes of the game) show that Heat point guard Goran Dragic is putting up better numbers than former Heat legend Dwyane Wade, who perennially dominated the category during his 13 seasons with the team.

Barry Jackson of the Miami Herald explored the issue and noted that Dragic has already more than doubled his clutch shot attempts this season from the 22 he put up last year. Thus far, he’s offered 48 attempts, hitting on 21 of them for a shooting percentage of 43.8 percent. Jackson also noted the following:

“Dragic has outperformed the Bulls’ Wade in the clutch this season. Wade is shooting 38.3 percent in the clutch (23 for 60), including 3 for 12 on threes.”

Last season, Wade made 45 percent of his 102 shots for Miami, with the latter amount constituting the fifth-highest attempted in the NBA at the time. Similarly, Dragic is the team’s leader in clutch shots attempted this season with his 48 attempts.

“If those moments are there, this is the fun part of the game; you want to be the guy who can make plays, make shots,” said Dragic.

During the Heat’s 21-5 run over the past few months, Dragic has attempted 15 clutch shots, second-highest on the team behind Dion Waiters (21 attempts), and says he’s happy to share the wealth in crunch time:

“It’s not going to be every game one guy taking them,” Dragic said. “This is the quality our team has. When you are defending a team like us, you don’t know who is going to shoot the ball.”

Dragic will have his next opportunity to improve on his numbers on Wednesday night when the Heat host the New Orleans Pelicans at American Airlines Arena.
[xyz-ihs snippet=”Responsive-ImagenText”]