Don't Miss
Home / Media / Goran Dragic Takes Shot at Ben Simmons, Gets Into It With Fan on Twitter

Goran Dragic Takes Shot at Ben Simmons, Gets Into It With Fan on Twitter 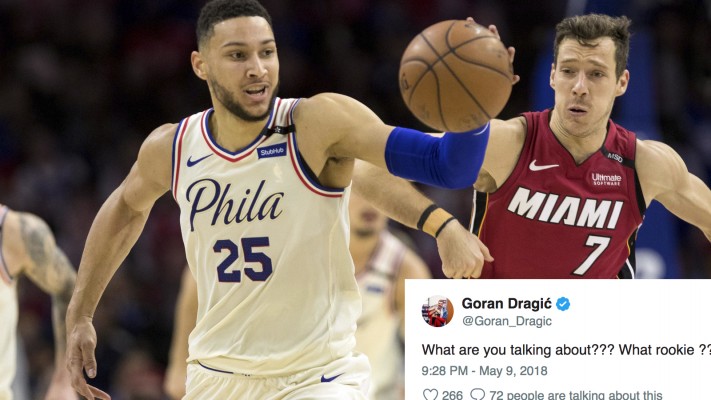 The Miami Heat‘s playoff series with the Philadelphia 76ers is already a thing of the distant past, but Heat point guard Goran Dragic is still holding a grudge.

The 76ers’ season came to an end on Wednesday night when they lost in the Eastern Conference semifinals to the Boston Celtics. Much of the blame could lie on rookie phenom Ben Simmons’ shoulders. While he averaged 14.4 points, 8.2 rebounds,  and 6.4 assists per game in the series, his complete lack of a jump shot hurt his team’s ability to score in crucial moments time and time again.

Following the game, Dragic decided to poke fun at Simmons’ lack of a jumper on Twitter.

Shortly after, a Simmons fan commented on Dragic’s post and questioned the veteran point guard’s reasoning for poking fun at a rookie struggling in the playoffs. Dragic quickly turned the critique into more ammo and responded to the fan with a question of his own.

What are you talking about??? What rookie ???

Dragic is of course referencing the season-long debate about whether or not Simmons should be eligible for the Rookie of the Year award. While he is technically a rookie because he sat out the entirety of the 2015-16 season due to a foot injury that took place before the season began, many have argued that Utah Jazz rookie Donovan Mitchell is more fitting for the award. It seems quite clear that Dragic is in Mitchell’s corner.

This isn’t the first time the Slovenian national has taken a shot at Simmons. In Game 5 of the series between the Heat and the 76ers, Dragic let his frustration get the better of him when he slapped Simmons in the back of the head in the third quarter. Considering that, and his most recent Twitter activity, it is quite clear that he has no love for talented youngster.

With both the 76ers and the Heat looking to improve this offseason, it will be interesting to see where this budding rivalry goes from here.
[xyz-ihs snippet=”HN-300×250-TextnImage”]