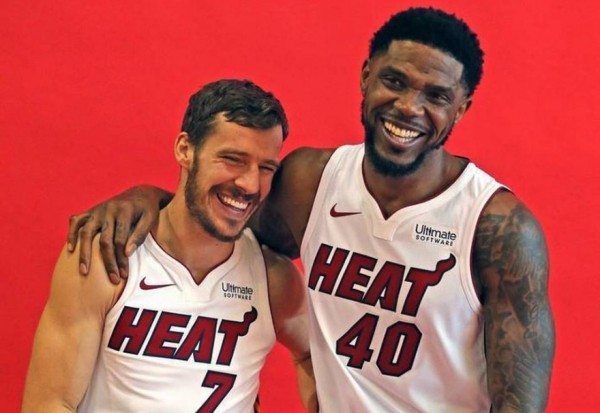 The news of former Miami Heat guard Dwyane Wade being bought out of his contract by the Chicago Bulls has brought with it hopes that he’ll end up re-signing with the Heat for the upcoming season. Among the most vocal in that department are two of Wade’s former teammates, Goran Dragic and Udonis Haslem, each of whom offered his opinion on the topic.

Dragic: "Hopefully (wade) comes back home. This is his home."

@ThisIsUD says he spoke to Wade: "We did say we wanted to finish our careers together… but that's a decision he has to make." pic.twitter.com/arYfdQb4yo

Udonis on Wade: "My heart, my soul, my mind and everything that’s speaking to me says I want him here, we want him here."

Dragic and Haslem weren’t the only ones who publicly offered their opinion, with Miami head coach Erik Spoelstra being asked about the situation on Monday at media day.

“It didn’t surprise me. Everybody knows how I feel about Dwyane, what my relationship is with Dwyane. I love Dwyane. He’s a brother of mine, a brother to all of this organization,” Spoelstra said. “My focus is on this group. That’s not even official. It can’t be a thought of mine. Ultimately, that will be a decision of Pat [Riley] and Andy [Elisburg] if it becomes a decision.”

While the relationship between Wade and Heat team president Pat Riley remains open to interpretation, the Heat are considered to be a strong candidate to bring Wade back to where he spent the first 13 seasons of his legendary career. The future Hall of Famer has indicated that his choice of a team will likely be made quickly.
[xyz-ihs snippet=”Responsive-ImagenText”]