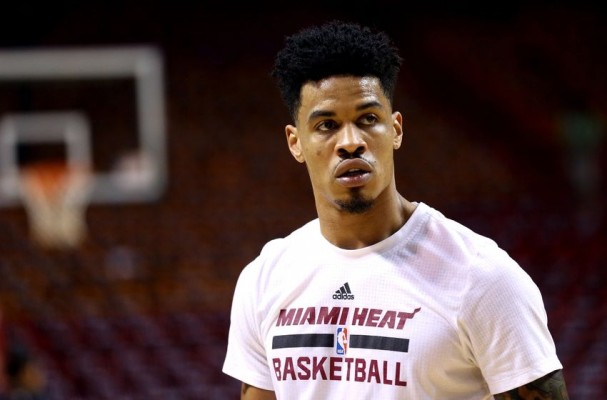 Gerald Green has been away from the Miami Heat for a week and new details have shed light on why that has been the case.

A Nov. 4th City of Miami police incident has detailed that Green punched someone in the eye in the lobby of his condo. Manny Navarro and Chuck Rabin of The Miami Herald describes exactly what happened on that night:

“Green, 29, showed up at the front desk of his condo with bloody hands, asked a clerk to call paramedics, then walked outside into the valet area, where he collapsed. Then Green recovered, walked back inside and punched someone in the eye who was trying to stop him from going back up to his apartment, the report says.”

Miami police officer John Collins wrote the following in his report of the incident:

“Mr. Green tried to make his way up to his unit. When victim #1 tried to hold Mr. Green in the lobby area for fire rescue, Mr. Green punched the victim in the right eye.”

The Heat recently announced that they had suspended Green for two games “due to conduct detrimental to the team.” However, Pat Riley refused to address what exactly led to the suspension while addressing the media earlier on Tuesday:

“I think the release and the statement pretty much says what it says — conduct detrimental to the team. And other than that, it’s a personal matter. It doesn’t need to be discussed.”

Riley was later asked if the 29-year-old shooting guard can be trusted to stay in line moving forward:

“I just believe that we can [count on Gerald moving forward]. I’ve been around this game for 48 years and he’s a really great kid, great athlete, can really shoot the ball. He’s explosive and we’re going to need him, and I think he’s going to show that to us.”

Green has missed the Heat’s last five games and is expected to rejoin the team on Friday. He is due to miss Thursday night’s game versus the Utah Jazz, which means his first game back with the team will be next Tuesday versus the Minnesota Timberwolves.

The shooting guard was hospitalized for four days before being released on Saturday. Green does not have a history of violence or run-ins. He has already apologized to the organization through a statement.

Through the first three games of the season, Green had averaged 10.3 points in 21.7 minutes per game.
[xyz-ihs snippet=”Responsive-Ad”]