ESPN Projects How Many Wins Miami Heat Will Have Next Season 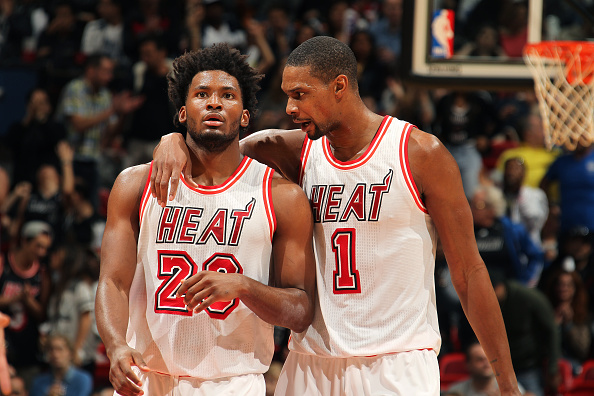 In a tumultuous offseason that saw Dwyane Wade abruptly leave the Miami Heat and other key personnel either head elsewhere or find themselves in limbo, the projections for the 2016-17 season are likely to be a source of interest for Heat fans.

One of the first to take a stab at offering his opinion on the matter is ESPN’s Kevin Pelton. He isn’t terribly upbeat about Miami’s chances with one month left before training camp opens, noting the departures of Wade, Luol Deng and Joe Johnson from the 2015-16 roster and the uncertain future of veteran forward Chris Bosh.

Pelton has projected the Heat to win 38.3 games, a victory total that would keep them out of the postseason. He predicts that they will finish in 10th place in the Eastern Conference, just below another playoff team from last year, the Atlanta Hawks. Even more ominously, an adjusted projection would drop them down two spots without Bosh in the lineup.

“Even with Chris Bosh in the lineup, the Heat may have a tough time making the playoffs after losing Luol Deng, Joe Johnson and Dwyane Wade. Without Bosh, Miami’s projection drops to 35.2 wins and 12th in the East,” Pelton wrote.

If Pelton’s numbers hold true to form, the NBA champion Cleveland Cavaliers and Golden State Warriors would have the most wins in their respective conferences. The Cavaliers are projected to have 52.1 wins, while the Warriors (who added Kevin Durant in the offseason) would end the upcoming campaign with 66.8 victories. The San Antonio Spurs would actually finish with the second-most wins, behind the Warriors with 54.5.

Miami gets their season underway on the road with an in-state trip to Orlando to face the Magic on October 26. Two nights later, they begin the home portion of their season with a matchup against a playoff rival from last year, the Charlotte Hornets.
[xyz-ihs snippet=”Responsive-ImagenText”]