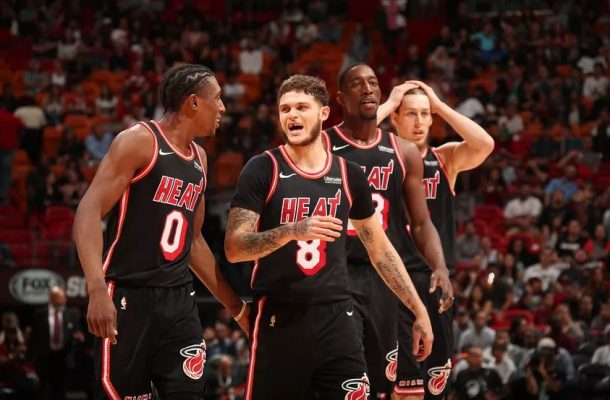 After making a brief five-game postseason appearance during the 2017-18 season, the Miami Heat‘s chances of again reaching the playoffs are currently the source of speculation. Those at ESPN appear to believe that the Heat will once again reach the postseason in 2018-19, finishing in sixth place in the Eastern Conference with a projected 44.8 wins.

Last season, the Heat were also the sixth seed in the Eastern Conference after a 44-38 regular season and faced the Philadelphia 76ers in the first round of the playoffs. After splitting the first two contests in Philadelphia, Miami was unable to win another game and watched their first playoff performance in two years come to an abrupt end.

According to ESPN’s Kevin Pelton, the reason for such a projection stems from the fact that the Heat have done little to change the makeup of their roster. While they’ve re-signed their own free agent in Wayne Ellington, the team has been unable to acquire any of the key free agents that were available at the start of last month.

Interestingly, ESPN’s projection of regular-season wins for the Heat is higher if team legend Dwyane Wade retires than it is if he were to suit up for his 16th NBA season. While Wade has yet to announce his decision, a team without Wade is projected to win approximately two more games than one with the future Hall of Famer.

“Miami brings back largely the same roster that went 44-38 in 2017-18, so it’s no surprise the Heat are expected to finish in about the same spot in the East,” Pelton wrote. “Miami’s projection would take a slight hit if future Hall of Famer Dwyane Wade (projected minus-2.4 RPM) decides to return for a 16th season.”

Such inaction in improving the roster is connected to the team’s inability to move expensive contracts in trades, like those handed out to Hassan Whiteside and Tyler Johnson. No other NBA team has been willing to take on such contracts without the Heat offering some additional incentives to sweeten any proposed deals.

One chief impediment in the Heat challenging for a berth in the NBA Finals was likely removed when the Cleveland Cavaliers lost LeBron James in free agency. The problem is that teams like Boston, Philadelphia and Toronto are still considered to be better than Miami, which serves as one of the challenges in the year ahead.
[xyz-ihs snippet=”HN-300×250-TextnImage”]