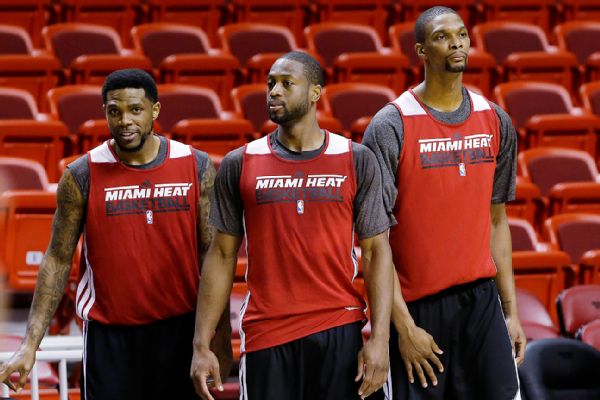 There is little doubt that the Miami Heat had a tremendously successful offseason, and it would appear ESPN has taken notice.

Five ESPN NBA experts sat down to talk about which teams are in position to improve or get worse next season. Four out of the five ESPN experts selected the Heat as the Eastern Conference’s most improved team for the 2015-16 season.

J.A. Adande cited health and a full season of Justise Winslow and Goran Dragic for why the Heat should be much improved this upcoming season:

“They had Chris Bosh available for only 44 games and Josh McRoberts for only 17 because of injuries last season. (I’m not even counting Dwyane Wade’s 62 games since that’s become normal for him; he hasn’t played in 70-plus games since 2010-11). Give mid season acquisition Goran Dragic a full year in Miami and Justise Winslow a couple of months to get acclimated to the NBA, and the Heat should zoom past the 37 wins they posted last season.”

Kevin Pelton went a step further and declared the Heat as the biggest threat to the defending Eastern Conference Champion Cleveland Cavaliers as long as they can remain healthy:

“In terms of sheer wins and losses, the New York Knicks may improve more because they started at just 17 wins. But the Heat figure to take a larger jump from the lottery to possibly the biggest threat to the Cleveland Cavaliers in the East if they stay healthy.”

The common rhetoric among all four writers was that Miami would be vastly improved due to health, full seasons from the Heat’s key players and veteran additions such as Gerald Green and Amar’e Stoudemire.

While Miami is coming off of a 37-45 season, they are just a year removed from making four straight NBA Finals appearances. The roster overall is different from what it was just a little over a year ago, but the Heat still have core pieces in Dwyane Wade and Chris Bosh.

Add in pieces that can contribute right off of the bat in Winslow, Green and Stoudemire, and it’s easy to understand why many are projecting the Heat as the biggest threat to the Cavaliers for Eastern Conference supremacy.
[xyz-ihs snippet=”Responsive-Ad”]