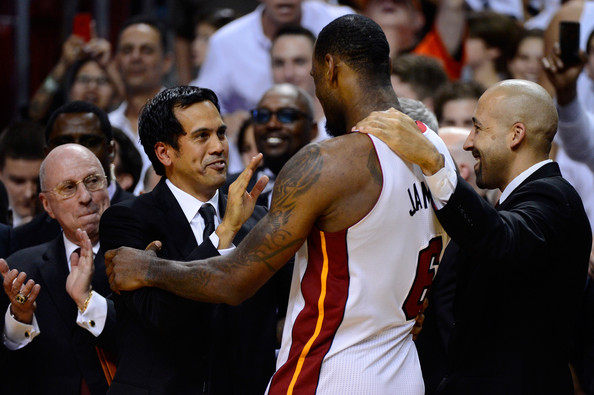 Miami Heat head coach Erik Spoelstra has had plenty of time to reflect over the years on his brilliant run with LeBron James. The head coach enjoyed four consecutive Finals appearances from 2011 to 2014 while also winning back-to-back championships from 2012 to 2013.

Spoelstra is aware that to date the “Big 3″ era of James, Dwyane Wade, and Chris Bosh was his highest peak of success as a coach. Yet, Spoelstra knows that it’s deeper than winning championships.

“That’s never going to go away,” Spoelstra said. “I mean, that’s what it’s all about, is the relationships you build and going through something collectively that stresses you out, that exhilarates you, that brings you together in a way that teams that don’t compete for a championship never get to that level of relationships.

“That’s what you want out of this business, you want to be able to create lasting memories, memorable seasons of being tested at the highest level. And then when teammates or players or staff, you go different ways, as will happen, you still have that common bond.”

Though those memories may be deemed the best years by most Heat fans, for Spoelstra, the years that followed James’ departure back to Cleveland also hold significance in his list of accomplishments. The Heat had advanced in the 2016 playoffs, before falling one game shy of reaching the Eastern Conference finals.

“Game 7, we would have had an opportunity to be in the Eastern Conference finals two years later,” Spoelstra said of the 2016 Eastern Conference semifinals against the Toronto Raptors. “I replay that series in my head all the time.”

He also credited the prior year in which the team was a few games away from making the playoffs. It was the first year of life with no James, while also dealing with the devastating blow of losing Bosh due to his battle with blood clots.

“I look back on that year as I replay games in my mind all the time,” Spoelstra said. “That game in Detroit, when Hassan [Whiteside] split his hand open, we were in the playoff hunt until that last week of the season. It would have been a great accomplishment for us to get in, and we were right there. And we had to deal with a ton of adversity, with CB going out.”

The Heat face off against the Los Angeles Lakers on Sunday night at 6 pm ET.
[xyz-ihs snippet=”HN-300×250-TextnImage”]