Erik Spoelstra: ‘We Fully Expect Chris to Be Healthy and Cleared for Camp’ 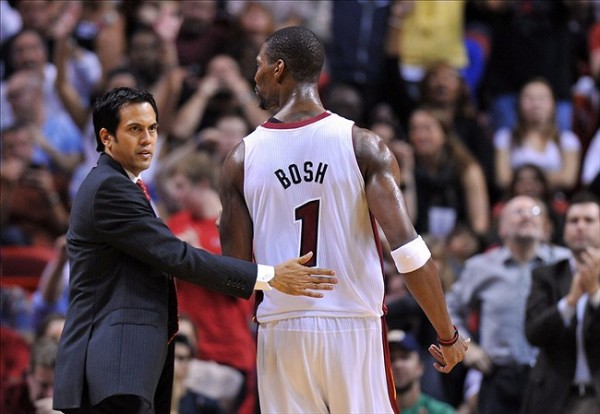 Miami Heat fans can take a huge breather and start getting ready for the 2015-16 NBA season.

That’s because according to the Sun Sentinel’s Ira Winderman, Chris Bosh is expected to be ready once training camp gets underway next week at Florida Atlantic University.

“We fully expect [Bosh] to be healthy and cleared for contact for camp,” said Heat head coach Erik Spoelstra.

Bosh last took the court in February before having his 2014-15 campaign come to an abrupt end after medical tests indicated the dangerous presence of blood clots in his lungs.

The timing of Bosh’s medical problems last year meant that he was never able to play with trading deadline acquisition Goran Dragic. While Hassan Whiteside‘s emergence as an effective force in the paint during last season was helpful, he and Bosh should form a potent duo for an entire season.

In Bosh’s 44 games last year, he averaged 21.1 points and 7.0 rebounds. Those scoring numbers were his highest since joining Miami in 2010.

Miami’s head coach expounded on other areas of the team, in particular, about the unique talents of his big men.

“Some of our bigger players are better outside the paint. We are going to try to leverage that,” said Spoelstra.

He also indicated about the confidence he has in an improved team in the year ahead.

“From what I’ve seen and I’ve felt, the guys are refreshed. You just hope every single year that you can approach this professionally as a chance to grow.”

Asked about the additions of veterans Gerald Green and Amar’e Stoudemire, Spoelstra expressed a bit of amazement that Miami was able to bring the two at the veteran’s minimum salary:

“If you had told me we would have an opportunity to sign both those players, I would have said that’s not realistic. I’m very open-minded going into the season with this roster.”

Another veteran who will be watched all season, given his shaky health status is Dwyane Wade. Spoelstra didn’t seem concerned about those health issues, saying:

“Dwyane is coming into this season ready, for whatever challenges it brings. I’m not coaching him with restrictions in mind. We’ll adapt and be aware of anything that may come up as the season goes on.”