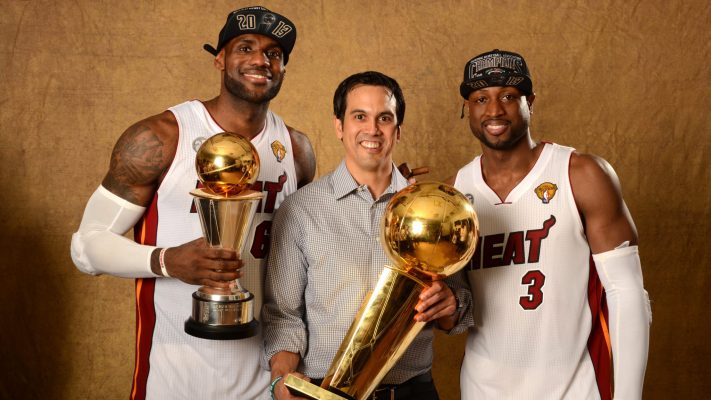 As Miami Heat icon Dwyane Wade and Los Angeles Lakers legend LeBron James get set for one final regular-season matchup, a familiar face spoke of the buzz surrounding their battles.

Heat head coach Erik Spoelstra, who has guided both players to championships and witnessed several clashes, talked to Ira Winderman of the Sun Sentinel about the intensity of the stars’ matchups:

“You’re talking about generational Hall of Fame players. That’s the type of buzz those kind of guys create and when you have them playing against each other, competing against each other, that’s what everybody wants to see, fans and organizations alike. You also want to see, most importantly, that guys aren’t playing buddy ball out there, and these guys don’t, they go after each other.“

Spoelstra, 48, has coached Wade for the majority of his career in addition to James while the superstar was in Miami. When the trio was together in South Beach from 2010 to 2014, they went to the finals all four years and won back-to-back championships within that span. Spoelstra was with both players through the ugly NBA Finals losses, prestigious award victories and amazing winning streaks.

Although both veterans came out of the 2003 draft and Wade’s career is coming to an end, it appears as if James is just getting started. The four-time MVP is putting up 28.3 points, 7.7 rebounds and 6.9 assists in his 16th season in the league.

The Heat saw and remembered the forward’s dominance live a few weeks ago in Miami. The three-time champion showcased a masterful performance with a whopping 51 points, eight rebounds, three assists and two steals on 61 percent shooting from the field in the two teams’ first matchup of the season.
[xyz-ihs snippet=”HN-300×250-TextnImage”]