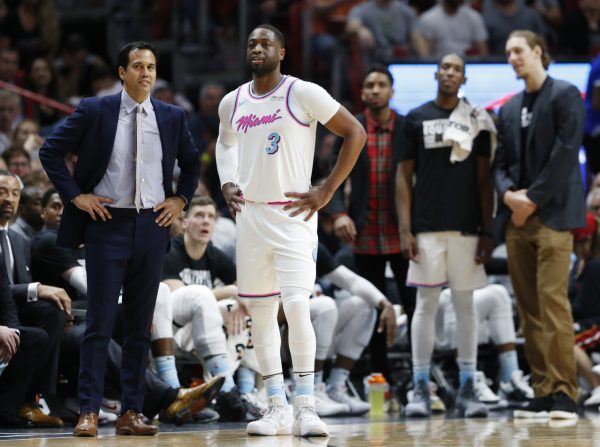 Dwyane Wade seems wholly committed to his plan to retire following the 2018-19 season, but that isn’t stopping Miami Heat head coach Erik Spoelstra from asking him to reconsider.

On Wade (who is questionable tonight with an illness), Spoelstra said this morning in Dallas: "Every once in a while, I nudge Dwyane and
say, 'You can always go back on that [retirement] decision. Nobody will penalize you.' But Wade has said he won't change mind.

There’s good reason why Spoelstra would want to remind Wade that his plans don’t have to be set in stone.

Despite the fact that Wade is a 37-year-old veteran, he’s still managing to remain quite productive this season.

So far this season, the three-time NBA champion is averaging 13.8 points, 4.4 assists, and 3.8 rebounds per game. He is also filling a valuable veteran role on a young roster that is searching for its identity.

While Spoelstra likely won’t be able to do much when it comes to changing Wade’s mind, there’s no harm in trying. Most Heat fans know they’d be doing the same if they could.
[xyz-ihs snippet=”HN-300×250-TextnImage”]