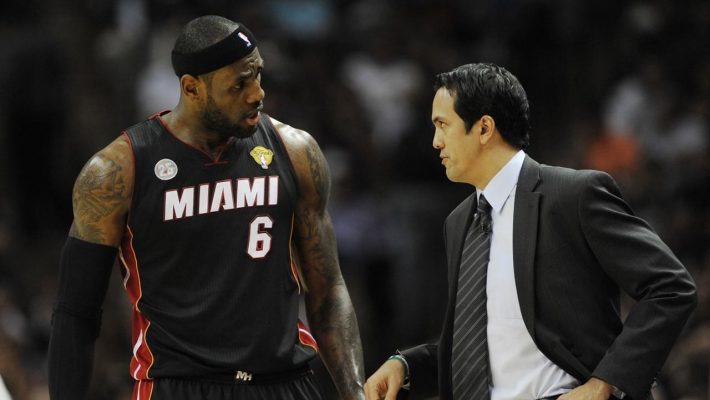 Miami Heat head coach Erik Spoelstra and former Heat forward LeBron James butted heads on occasion because of conflict during their four seasons together. Spoelstra remains in his role more than four seasons after James left, yet he knows that trying to coach against the superstar has turned out badly for some other NBA coaches.

James L. Edwards III of The Athletic looked at how new Detroit Pistons head coach Dwane Casey has bounced back after being fired in that same role by the Toronto Raptors last May. Casey was dismissed soon after James and his former Cleveland Cavaliers teammates swept them in the Eastern Conference semifinals. That was after leading the Raptors to the best regular-season record in the conference.

Spoelstra marveled at Casey’s ability to adapt to his specific circumstances. He also dismissed the idea that Casey should have been fired for coming up short against James during the past three postseasons:

“I think Dwane has reinvented himself as a basketball coach as much an anybody. It’s a great example. It’s inspiring for me as a younger coach. He came in and was known as a zone coach, and his last few Toronto teams were really tough, mano-a-mano, 5-on-5 defensive teams. Then, last year, they really incorporated the 3-ball, playing with a little more space. He did what they needed to take another step for that franchise. And what happened? He got fired for it. He really did a tremendous job and won the East.

“There’s a guy that got a lot of people fired.”

Other NBA head coaches offered similar accolades toward Casey, but Spoelstra knows just how much of an impact James can have on a team. During James’ four seasons in Miami, the 16-year veteran helped lead the Heat to the NBA Finals each season. In both 2012 and 2013, he helped Spoelstra’s squads win league titles.

Last July, James left the Cavaliers in free agency. That’s resulted in his old team dropping 11 of their first 13 games and also resulted in another head coach getting fired. In this case, it was former Cavs head coach Tyronn Lue, who was dismissed after the team dropped their first six games.

Spoelstra is in no danger of being fired, but he knows that talented players can make his life easier. That’s one reason he was eager to see the Heat make a concerted effort to acquire forward Jimmy Butler. That ultimately came up short, but Spoelstra will continue to push forward and absorb what he can from veteran coaches such as Casey.
[xyz-ihs snippet=”HN-300×250-TextnImage”]